Tonight With Vladimir Putin will be hosted by an animated version of Russian President, played by comedian Nathaniel Tapley.

Tapley's performance as the controversial world leader will be subject to live motion capture to generate the computer graphics for the Putin character in real time. 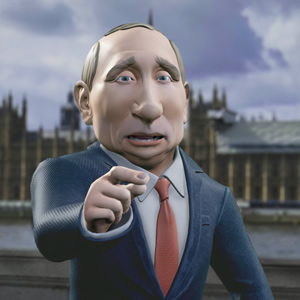 Produced by Phil McIntyre, the series has been developed in conjunction with world-leading digital effects experts Framestore. The Soho based company have a myriad of Oscar and BAFTA awards to their name, working on some of the biggest film series in the world.

Two 12-minute episodes have already been recorded as a pilot miniseries, and will be broadcast this Summer.

"Forget global politics, landing two pilot episodes on BBC Two of his soon to be world-famous chat show marks the ultimate victory for Vlad, leader of the free world."

They explain of the technology behind the programme: "In a television first, ground-breaking live VFX, created using performance capture technology, developed by creative studio Framestore, enables a 3D digital cartoon of Putin to walk around and sit behind the desk, interviewing real human guests in front of a studio audience, all in real-time."

The show has been created by Framestore's Simon Whalley, Jasper Gibson of satirical website The Poke, and comic animator and musician Joel Veitch, of cult websites B3ta and RatherGood.com.

Actor and writer Natt Tapley has written on shows including Have I Got News For You and The Revolution Will Be Televised, and has previously played clueless Tory MP character Sir Ian Bowler.

A video teaser introducing the show has been released:

Broadcast dates for the new comedy are expected to be revealed in the coming weeks. 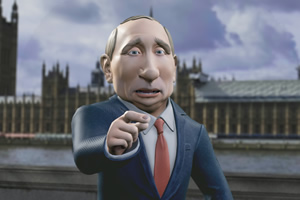