Joel Dommett is to host a TV quiz show where celebrities play to win cash for members of the public, aided by a comic virtual assistant.

The producers explain: "Hey Tracey! is a brand-new quiz show for ITV2, hosted by Joel Dommett, where celebrities play to win cash for members of the public... with some unpredictable consequences. In real life if you don't know the answer to a question you can ask Siri or Alexa. In this show, unfortunately you're stuck with Tracey.

"If our celebrities don't know the answer to Joel's unusual questions, they can say 'Hey Tracey!' and enlist the help of his very own virtual assistant. But forget your high-end Silicon Valley artificial intelligence - Tracey was thrown together by some sixth formers in the late 90's as part of their technology coursework... and she can usually be found tucking into a pie or painting her nails.

"Each time our celebs summon her help, Tracey can connect them with someone in the real world that might be able to help. Less phone-a-friend, more like comedy cold calling. And that means everyone from dog groomers to massage parlours, piano tuners to equine dentists, roadside burger vans to reptile houses.

So, if our celebrities want to win big, they'd better make sure they say... 'Hey Tracey!'"

Joel Dommett says: "I'm super happy to be hosting new show Hey Tracey! for the sweet legends at ITV2. It feels really fresh and funny while also making you squirm with awkwardness. I heavily campaigned to call it Hey Joel, but apparently I'm not famous enough and doesn't work for the format. I can't wait for everyone to see it - it's gonna be a blast."

The show is being made by production company Dr Pluto, with six episodes due to be recorded in front of a studio audience in April (Tickets).

Paul Mortimer from ITV comments: "We're delighted to be partnering with Dr Pluto on this crazy entertainment series, very much our subversive take on the TV Quiz Show. Hey Tracey! feels totally at home on ITV2, now the established entertainment destination for the twenty-something audience."

Peter Tierney, ITV's Assistant Entertainment Commissioner, adds: "Hey Tracey! is a quiz show with a proper laugh out loud personality and Joel is the perfect host to take us through this nuts, unpredictable and completely unique new series."

James Abadi, Executive Producer for Dr Pluto, comments: "We felt Siri and Alexa were a bit smug so decided to invent a virtual personal assistant who was daft but brilliant fun. We're delighted to have been given this opportunity by Paul, and look forward to delivering a great show with Joel, Pete and the team." 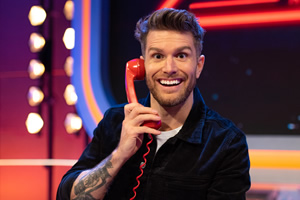