Damon Beesley (left) and Iain Morris (right), the creators and writers of The Inbetweeners, have announced a new sitcom project.

Afternoons (working title) has been commissioned as a full six-part series by BBC Two.

The sitcom - from Beesley and Morris's own production company, Fudge Park, in conjunction with BBC Studios - will follow "the mostly off-the-pitch misadventures of three young football players on a fictional Premier League team".

The BBC explains: "The stories focus on their friendship, as these boys from around the world are far less proficient with women, money and social media than they are at scoring goals."

Beesely and Morris will write together on the project for the first time since The Inbetweeners 2.

Shane Allen, Controller of BBC Comedy, says: "Having Iain and Damon back together on a new scripted piece is about as good as it gets in comedy. Their take on what happens off the pitch brims with their skill at creating a gang of instantly recognisable characters, memorable dialogue, deftly tuned plots and excruciating humiliation is never far away."

The duo say: "We're delighted to be working together again, and incredibly grateful to Shane Allen and the BBC for the faith they have shown in the idea. We're hoping to show viewers the hilarious inner lives of three young men who just happen to have a very stressful job in the public eye."

Emmy Award-winning producer and businessman Tom Werner will act as one of the show's executive producers. He holds a substantial stake in Liverpool Football Club and acts as the club's chairman.

With credits including Mork & Mindy, Taxi and Roseanne, he quips: "I have been friendly with Iain and Damon for quite a while, and I have longed to work with the two of them as they are such brilliant comedy writers. I hope my experience with Liverpool can provide some authenticity and humour to what is a very exciting format."

Jonathan Blyth, BBC Studios Director of Comedy, said: "We're very excited to be collaborating with Iain and Damon on this new series. It's a cracking show that will delight audiences around the world, and promises to be a global hit."

More information about the series, and casting details, will be revealed at a later date.

The second series of Fudge Park's White Gold, which Beesley writes and directs, starts in early March on BBC Two. 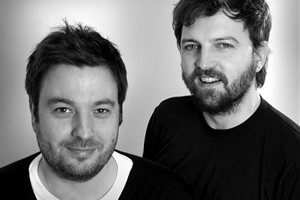