The UKTV network is developing a comedy drama about one man's mid-20s depression.

The new programme is based on the best-selling memoir Reasons To Stay Alive, by Matt Haig (pictured).

Two Brothers Pictures, the company that makes programmes including Fleabag, is behind the project, according to Hollywood industry website Deadline.

They report a UKTV spokesperson confirming the series, but saying it is only in "very early stages of development". It is not yet known which of the network's channels the programme may be aimed at, but Dave is perhaps the most likely.

Haig's memoir recounts his own story of becoming depressed aged 24. The "funny" book quickly became a major best-selling hit upon its publication in 2015, with endorsements from the likes of Stephen Fry.

The book's blurb explains: "What does it mean to feel truly alive?

"Aged 24, Matt Haig's world caved in. He could see no way to go on living. This is the true story of how he came through crisis, triumphed over an illness that almost destroyed him and learned to live again.

"A moving, funny and joyous exploration of how to live better, love better and feel more alive, Reasons To Stay Alive is more than a memoir. It is a book about making the most of your time on Earth."

Deadline notes that the book includes a number of formatted lists, such as "things you think during your first panic attack", "things you think during your 1,000th panic attack" and "things people say to depressives that they don't say in other life-threatening situations". It's likely that this formatting device will be incorporated in the TV version too.

More information about the project will be revealed if it progresses beyond its present, initial development stage.

The below Newsnight profile sees Haig talking about his books and mental health, including a section on how he came to write Reasons To Stay Alive: 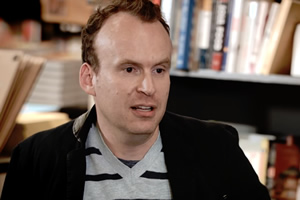