ITV is to pilot a stand-up show in which comedians perform in 'real world' locations, rather than on the stage.

The channel explains: "Featuring Tom Allen, Kerry Godliman, Milton Jones and a host of other brilliant stand-ups, Out There showcases the country's top comedians performing 'out there' in the real world in places you've never seen them before."

The show has been devised by Mock The Week co-creator Dan Patterson, and will be produced by the panel show's production company Angst Productions.

Speaking about the show, the producers explain: "The format lifts the comics out of the comedy club and puts them in real-life situations, performing hilarious routines and jokes in real world locations. Where else could you see one-liner specialists Darren Walsh and Mark Simmons trading gags in a hot tub? Tom Allen stepping into the shoes of a stressed-out teacher in a school classroom? Kerry Godliman performing her routines from inside a Victorian folly? Answer? Nowhere except Out There."

The show features a number of one-liner comedians amongst the line-up, with the producers promising "a higher joke-per-minute rate than anywhere else on TV".

Out There will be shown on ITV later in February. 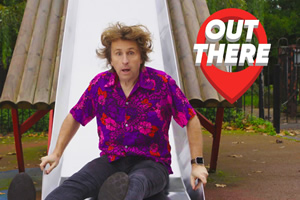