Vicki Pepperdine and Joanna Scanlan are to star in TV comedy Old Baggage.

Industry website Deadline reports that the duo's production company George + George is adapting the best-selling book by Lissa Evans for the screen.

Published in June 2018, the novel is set in 1928 and follows the story of Matilda Simpkin. The book's blurb explains: "Mattie is a woman with a thrilling past and a chafingly uneventful present. During the Women's Suffrage Campaign she was a militant. Jailed five times, she marched, sang, gave speeches, smashed windows and heckled Winston Churchill, and nothing - nothing - since then has had the same depth, the same excitement. Now in middle age, she is still looking for a fresh mould into which to pour her energies..."

Old Baggage is described as "a funny and bittersweet portrait of a woman who has never, never given up the fight" and follows the story as Matilda as she "embarks headlong on an ambitious new venture that pits her against a new enemy: the rising tide of pre-World War Two British fascism. What begins with hope and fervour is jeopardised by the very past Mattie is trying to re-ignite and, as she clings with blind obstinacy to her own ideals, she unwittingly threatens the friendships that hold up her world."

Deadline reports that George + George and Baby Cow are working together alongside US company Braven Films to develop Old Baggage as a returning series, after optioning the book.

Vicki Pepperdine and Joanna Scanlan - who have previously starred together in Getting On and Puppy Love (pictured) - are set to take the lead roles in the comedy. One will play Matilda, and the other The Flea, Matilda's lifetime companion.

Joanna Scanlan says: "Lissa's grasp of character and her immaculate feel for women's history made this property irresistible to us as actors and now producers. The book made us laugh, it made us cry and it kept us up reading till three in the morning. We can't wait to start to develop it for long form television."

Christine Langan from Baby Cow comments: "We wanted to work with George + George because of their talent for unearthing unique stories about women and presenting them to audiences in fresh, exciting and funny ways. Lissa's utterly charming Old Baggage is both a fascinating take on history and deeply relevant to the lives we live today."

Frida Torresblanco of Braven Films adds: "Old Baggage is another brilliant work from Lissa Evans, she surprises us again with a transcendent work of extreme timeliness. I'm so inspired to be working again with her on this prequel to the equally defiant Crooked Heart. This is a deeply evocative dynamic story. Her fun brave women are the authentic origin of the social changes that we relive these days."

What do you do next, after you've changed the world?

It is 1928. Matilda Simpkin, rooting through a cupboard, comes across a small wooden club - an old possession of hers, unseen for more than a decade.

Mattie is a woman with a thrilling past and a chafingly uneventful present. During the Women's Suffrage Campaign she was a militant. Jailed five times, she marched, sang, gave speeches, smashed windows and heckled Winston Churchill, and nothing - nothing - since then has had the same depth, the same excitement.

Now in middle age, she is still looking for a fresh mould into which to pour her energies. Giving the wooden club a thoughtful twirl, she is struck by an idea - but what starts as a brilliantly idealistic plan is derailed by a connection with Mattie's militant past, one which begins to threaten every principle that she stands for. 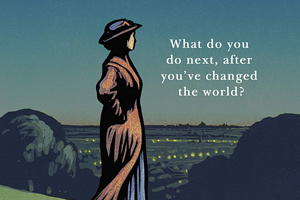