The channel explains that Britain's Greatest Comedian "will whittle down a plethora of Britain's brilliant comics from past and present to find the definitive top 30".

A voting form is now live, allowing comedy fans to pick their favourites. The final order of the programme will then be decided by a "comedy jury" consisting of famous comedians, performers, actors, producers and experts.

The channel explains: "With a rich history of comedy legends such as Tommy Cooper, Bob Monkhouse, Victoria Wood, Eric Morecambe, Dawn French, Peter Kay and many, many more, the battle for the number one spot is going to be fierce."

Commissioner Iain Coyle says: "We've almost come to blows just discussing this in the office. It's a tough job, but by the end of the show we will have a definitive answer. However, if Les Dawson isn't in the top ten, I'll be livid."

Gerald Casey, channel director for Gold, adds: "Celebrating Britain's best-loved comedy is central to what we do on Gold, so we're really excited to see who the viewers and our judging panel think should take the top spot. With so many incredible home-grown performers to choose from, it's not going be easy!"

Britain's Greatest Comedian will air later this year on Gold.

The vote closes at midnight on Wednesday 6th February. The following names have been preselected as nominated names, but voters can also put forward other suggestions. 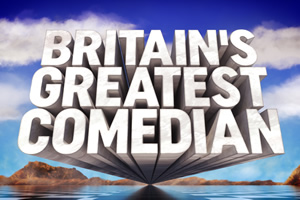