Comedy Central has announced that it has ordered a new comedy travelogue series with the working title The Comedy Bus.

The six hour-long episodes will be filmed in the UK this month and will air later in the year on Comedy Central.

Talking about the show, the network explains: "It will follow the six comedians as they embark on a journey to each of their hometowns in search of what life is like there now. On what will be a literal trip of their lifetimes, each comedian will act as tour guide for the episode around their own hometown."

Louise Holmes from Comedy Central says: "I absolutely love the idea behind this format. Everyone has a past - and a hometown - and now we get the chance to delve into the embarrassing secrets and fascinating insights of both from a comedy perspective. A fantastic range of comedians from around the UK are about to hit the road together on our Comedy Bus - forensically dissecting each other's past lives as well as sharing every part of the journey along the way. This promises to be a comedic treat on every level." 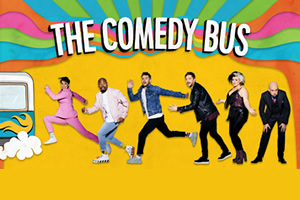