Conceived in 1961 with a single Golden Rose prize, the prestigious awards, which cover television from across the world, have grown year on year. This time, nearly 500 programmes from approximately 300 broadcasters and production companies were submitted.

Created by Mackenzie Crook, Detectorists follows the adventures of a group of friends who go metal detecting. Launched on BBC Four in 2014, it has run for three series. A fourth series is unlikely.

Speaking to British Comedy Guide in an interview in December, Crook said "I don't think it could carry on for series after series without starting to get dull, and I think this amount of episodes is a nice amount to leave there and leave the characters in peace. I think I'm happy to leave it there." 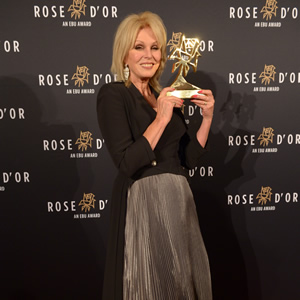 The results were announced at a ceremony next to Berlin's iconic Brandenburg Gate. Crook didn't attend, but the award was picked up by Shane Allen from the BBC and Executive Producer Jim Reid.

The Rose d'Or Awards also recognised Absolutely Fabulous star Joanna Lumley, presenting her with a Lifetime Achievement Award for her outstanding contribution to the entertainment industry.

"I can't tell you what it means to me," she said as she discussed her career onstage with the BBC's Paddy O'Connell, who hosted the awards with German presenter Katjana Gerz.