Porters is to return for a second series.

UKTV's Dave confirmed that the hospital-set sitcom will return later in the year for six more episodes.

The comedy, which launched in September 2017 as a three-part series, focuses on daydreaming wannabe doctor Simon (Ed Easton), beset on all sides by the eccentric staff and patients at St Etheldreda's hospital.

The new episodes are again written by Dan Sefton, who has experience of working in an A&E department in real life, and is also the writer and creator of hit ITV medical drama The Good Karma Hospital.

Dave's Pete Thornton said: "It's really exciting to be able to confirm the return of Porters for a full series. The first three episodes set out the show's credentials as a highly original comic creation and we're very much looking forward to witnessing the cast's further adventures via the fertile imagination of one of the UK's most successful and prolific writers of recent years."

Laurence Bowen, from production company Dancing Ledge Productions, comments: "We're delighted that Porters is coming back for a second shift and look forward to sharing another round of stories from the comedy basement of St Etheldreda's hospital. Dan Sefton's gift for hilarious tales of medical mishap is second to none."

UKTV has also recommissioned Zapped at the same time. Luke Hales from the network says: "The characters and worlds of both Zapped and Porters have established themselves as rich, distinct and very funny. It's a pleasure to welcome them back for further adventures and I cannot wait to see what they will be getting up to. They're a fantastic addition to the channel as part of Dave's continued dedication to commissioning original comic content." 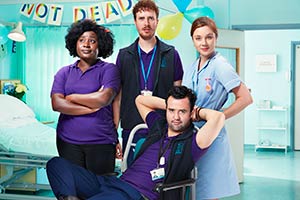