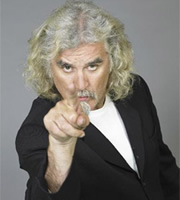 Billy Connolly has, once again, come top of a Channel 4 poll that names the funniest stand-up comedians. The results of Channel 4's revised and updated 2010 stand-up poll were revealed in a four-hour countdown programme. The order of standings was decided via a combination of viewer votes and a judging panel.

Billy Connolly topped the list the first time the channel run the poll back in 2007. Peter Kay came second that time, but has dropped to sixth in the new updated list.

Michael McIntyre didn't even feature in the original poll, but he has shot straight into 9th spot. Other new entries in the updated list include Frankie Boyle (29th) and Russell Howard (35th).

Meanwhile, Stewart Lee, who based the title of one of his stand-up shows on his 41st spot, may now have to update his posters and website because he has jumped to 12th in the list. Ross Noble's Twitter campaign to vote up classic stage comic Tommy Trinder could be considered a relative success - the wartime comic is now listed 44th.

Within minutes of the countdown finishing some criticism of the results popped up on social networking websites, such as Twitter and Facebook. Some comedy fans questioned how the likes of Jim Davidson, Bernard Manning and Joe Pasquale could be included in the top 100, when "more respected" comedians were missing. Rob Brydon, Richard Herring, Mark Steel, Marcus Brigstocke, Andy Parsons, Jason Byrne, Mark Watson, David O'Doherty, Tim Key and Rich Hall were some of the omissions mentioned.

There was also some surprise at the relatively low positioning of some of the biggest names in British stand-up, notably Lee Evans (only 17th), Jack Dee (26th) and Frank Skinner (45th). Meanwhile, members of British Comedy Guide's message board have expressed disbelief that Billy Connolly had been named Britain's best stand-up again, suggesting in their posts that the Glaswegian comedian is no longer popular enough to come top of a new public vote.

(For the results of the previous poll see here)