Michaela Coel has said she doesn't want to make any more episodes of her hit TV comedy Chewing Gum.

The show, which launched on E4 in October 2015 to critical acclaim, observed across two series the romantic adventures of an innocent 22 year-old (played by Coel).

The show won Coel two BAFTAs and a number of other leading awards, however she has now told Channel 4 executives that she feels she reached "a creative peak" at the end of the last series and doesn't want to make any further episodes of the sitcom.

Writing on Twitter to her fans, the star said: "Thank you to all of you. Chewing Gum has been amazing but it's only the beginning, more stories to tell, & my latter will be greater."

Channel 4 confirmed the news in a statement, saying: "Chewing Gum is a vibrant, hilarious and unique comedy of which we are incredibly proud. Though there currently aren't any plans for a 3rd series, we hope to work with the hugely talented Michaela Coel again soon."

Channel 4's Fiona McDermott told trade magazine Broadcast: "She's a very funny and clever writer so she'll always have a home here if she wants to do a project with us."

The executive added: "It's bittersweet but it's always been part of what we do here. We establish people and then there's a point where they have to move on."

This story was updated on Monday night to include the Twitter quote. 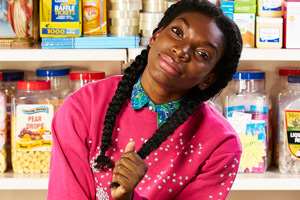