Comedy Central today announced that it has re-commissioned The Chris Ramsey Show for a second series. In the process, the format will change, with the comedy becoming the channel's first ever weekly topical chat show.

Ten 30-minute episodes have been ordered. The channel explains: "The second series will continue to involve Chris, one of the UK's biggest comedic stars, combining big name guests and ingenious games, but this time round will have even more of a topical focus, creating additional buzz and stand-out moments for viewers."

The first series, which aired at the start of the year, delivered strong ratings for the channel reaching 724,000 16 to 34 year olds - the channel's key target demographic.

Chris Ramsey says: "I'm over the moon to be making another series of The Chris Ramsey Show with Comedy Central. Some of my best ever experiences were made during the first series and working with my team was an absolute pleasure, so I can't wait to do it all over again, but this time bigger and better."

Louise Holmes from Comedy Central says: "After the success of the first series of The Chris Ramsey Show, we are rightly upping the ante with the ambition of the second. As Comedy Central continues to grow in share and viewers year on year, it feels like the right time for us to give our audiences our take on a weekly must-see chat show, with funny at its heart. Chris is a brilliantly warm and generous host and we're delighted to continue our journey with him and this show."

Richard Allen Turner, the Executive Producer for production company Avalon, comments: "It's been a great experience working together with Comedy Central to bring Chris's show to the screen. I'm delighted that we will be returning, with an expanded series that is being backed by an ambitious channel eager to support and grow breakout talent."

Chris Ramsey is set to become well-linked with Comedy Central as it was recently announced that he will also take over as host on Stand Up Central.

The new episodes of The Chris Ramsey Show will be filmed with a live audience close to broadcast in 2018. 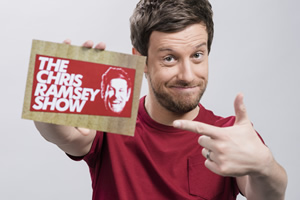