Channel 4 has axed its improvised comedy show Host The Week after a single episode.

The format, devised by the production company behind BBC Three's hit improv series Murder In Successville, sees a presenter dropped without preparation into a number of topical sketches, where they must then improvise alongside a team of comedy actors.

Gogglebox star Scarlett Moffatt hosted the opening episode on Thursday. However, the programme was met with mixed reviews and attracted only 470,000 viewers in overnight ratings, down more than 60% on the slot's average for the past three months.

The figure is comparable with many other of the channel's contemporary comedies, but evidently lower than bosses had hoped for.

Speaking to British Comedy Guide, a Channel 4 spokesperson confirmed the show would not return, explaining: "We're brave enough to take risks with innovative programme ideas but also to acknowledge they don't all work and move on."

The episode due to be recorded tonight with guest host Jack Whitehall has now been cancelled. Host The Week was originally announced as a three-part series, however Channel 4 only billed two episodes and a third host was never confirmed.

Channel 4 had expected big things of the format. When announcing the show earlier in the month, it said: "This hilarious and topical hybrid show will offer a unique televisual experience for viewers as anything can, and probably will happen. With the smash hit Murder In Successville, Tiger Aspect has an excellent track record in organised TV chaos and we hope to deliver something just as brilliant."

At the time of writing Jack Whitehall's episode is still showing up in electronic programme guides, but the EPG will soon be updated. A new episode of 8 Out Of 10 Cats Does Countdown will be shown at 9pm on Thursday instead.

Below is a clip from Host The Week, in which Scarlett Moffatt must translate the news: 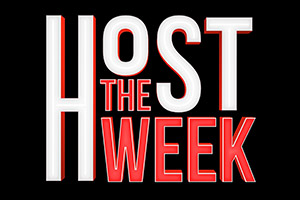