The three part series for channel Gold focuses on the fictitious, contemporary court of Henry IX, King of the United Kingdom.

Edwards, who played Michael Gregson in Downton Abbey and whose previous comedy roles include playing Iain in Trying Again (pictured) and portraying Palin in Monty Python biopic Holy Flying Circus, will assume the role of head of state.

The sitcom is described as "a modern story of a forty-something man going through a mid-life crisis - except in this instance he's the King of Great Britain and the Commonwealth".

Miranda star Sally Phillips will play his aloof wife Queen Katerina, One Foot In The Grave's Annette Crosbie will take on the role of his mother Charlotte, and Pippa Haywood (Green Wing) will portray Prime Minister Gwen Oxlade.

Kara Tointon, the former EastEnders actress, plays Serena, the Palace florist and potential love interest. Actors such as Rising Damp's Don Warrington are also involved, in roles yet to be revealed.

Filming on Henry IX begins today. It will be shown on Gold in 2017. 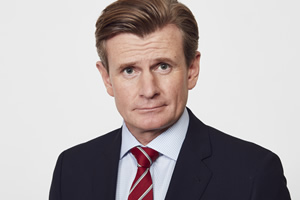