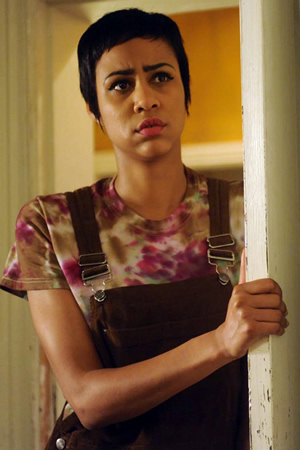 Channel 4 has announced the cast for Cut, it's new comedy drama series about a group of highly dysfunctional civil servants who are forced to relocate from London to Northampton.

Zawe Ashton, who will be familiar to comedy fans for portraying Vod in Fresh Meat (pictured), will take on the lead role of Katherine. The character is described as 'mercurial' and 'in a near-permanent state of frustration.' Katherine has been turned down for an attractive redundancy package, is recently divorced and troubled by secrets in her past, so her relocation from London to Northampton to join the Immigration Pathway department looks set to be the last straw for her.

The six 45 minute episodes will observe as Katherine and her colleagues re-adjust to their new lives, their new surroundings and an inescapable new surrogate family of colleagues. Things are made particularly difficult for Katherine when she realises she'll be working with Anthony (Weston-Jones). Cited in Katherine's divorce papers, their relationship is 'complicated to say the least'.

Sacha Dhawan plays the perma-wasted Danny, a chancer who has somehow found himself managing the Immigration Pathway office after he accidentally pretended to be a devout Muslim. Struggling to work around his fondness for drink and drugs, he's constantly led astray by his feisty PA, Angela, played by Jo Hartley.

Sophie Rundle takes on the role of Jenny, a character described as 'irrepressibly and irritatingly upbeat'. Jenny is a ball of energy with a relentlessly sunny disposition that hides a profound vulnerability. Meanwhile Nathanial, played by Samuel Barnett, is naïve and well meaning, trying his best to do his job, but never quite certain what his job actually involves.

Completing the cast is Anastasia Hille, who has been cast as the shell-shocked Jeffries, the head of Human Resources who is responsible for Katherine and Danny's relocation. She's as surprised as everyone else to find herself on the receiving end of her own wave of cuts. Behind her stoical and affable nature, and with her own problems at home, she's as lost as everyone else.

Cut has been written by DC Moore and is being made by Misfits producers Clerkenwell Films. Kieron Hawkes (The Mimic) and Rob McKillop (A Young Doctor's Notebook) will jointly direct the show.

Cut is described by the channel as "full of black humour, razor sharp dialogue and intricately drawn relationships. It's a timely workplace comedy drama that is laced with an acerbically surreal sensibility which cuts straight to the quick of a lost generation." The channel adds: "Inventive, comical and utterly timely, Cut is both a deft portrait of a generation struggling with the realities of 21st century work life and a warm exploration of the camaraderie and friendships that can bloom in times of difficulty."

The series will begin filming in Glasgow this summer, with a broadcast scheduled for the autumn.

Not Safe For Work