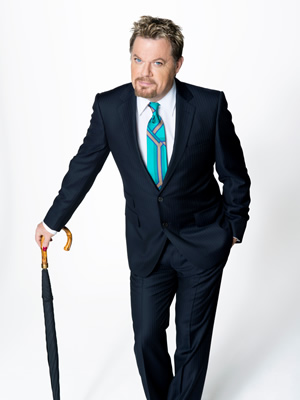 The BBC has released details about the ninth series of Live At The Apollo, its hit stand-up format.

The six-part series will be broadcast in November, with Eddie Izzard (pictured) acting as host on the first episode. As well as performing, he will introduce sets from rising star Josh Widdicombe and Trevor Noah, the South African comedian whom he has been championing for some time now.

Other guest hosts include Jack Whitehall and ventriloquist Nina Conti. This series will also see Jack Dee back in the role of host for one episode - the comedian fronted all the episodes of the first two series when the format launched in 2004.

The full line-up is as follows, with the host first in the list:

The show's producers comment: "The Bafta nominated Live At The Apollo returns to BBC One this November for a highly anticipated ninth series with six brand new episodes. At the forefront of its genre, the roll call of stand-ups who have performed in front of the famous Live At The Apollo lights plays out like a who's who of comedic royalty and this series is no different.

"Each episode will see a national favourite stand-up acting as compere and performing to the audience before introducing two of the best stand-ups currently on the UK comedy circuit."

The episodes have already been recorded. As in previous series, the comedians' sets were taped in front of an audience of over 3,500 at London's Hammersmith Apollo.

The exact scheduling of the episodes has not yet been announced, so it is not yet known which night the episodes will air on. Series 8 was shown on Saturday nights, whilst Series 7 was broadcast on Friday nights. Transmission details are expected shortly.