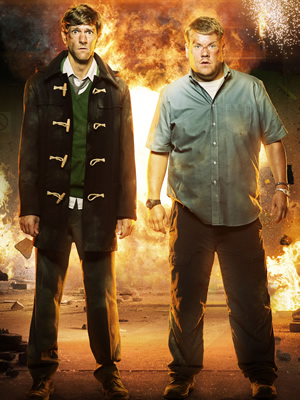 Story update, 30th October 2013. Following the final episode, which scored overnight ratings of 1.83 million viewers, James Corden posted on Twitter 'Waking up to so many incredible messages about The Wrong Mans. So very sweet. They'll be back. Thanks for watching, it means the world x', and Mathew Baynton posted 'Sam and Phil will be back'.

Comedy thriller The Wrong Mans, created by and starring Mathew Baynton and James Corden, is close to being recommissioned for a second series.

According to a report from trade publication Broadcast, BBC comedy commissioner Shane Allen has held discussions concerning the "timing and logistics" of filming a second series of the comedy series.

Starring, created and written by James Corden and Mathew Baynton - with Tom Basden - the series follows distinctly average county council office staffers Sam and Phil, who become embroiled in a deadly international criminal conspiracy after innocently discovering a ringing mobile phone at the site of a horrendous road accident.

As bodies drop all around - and on top of - them, the bumbling pair attempt to extricate themselves from the madness of Chinese criminal gangs, eg-KGB officers, corrupt businessmen, MI5 moles and the obligatory femme fatale.

Directed by Hollywood and TV director Jim Field Smith, the comedy is a co-production between the BBC and American premium video-on-demand service, Hulu.

The Wrong Mans has not yet launched in the US, but has been a ratings success on BBC Two to date. Its first episode proved to be the channel's single largest comedy audience of 2013, attracting an overnight viewing figure of 3.1 million people - rising to 4.5m across the week, including repeats and iPlayer views. The figure also made it the highest rating comedy launch for the channel since Extras began in 2005.

The three subsequent episodes achieved an average overnight rating of 2.11m; significantly lower than the opening instalment, but comfortably higher than the regular average of 1.7m for the 9pm, Tuesday evening timeslot.

Episode 4 - down 420,000 viewers on Episode 3 - broadcast last night, with a further two episodes in the series yet to be shown. The series, filmed across the first few months of this year, is also in the top 10 most-requested programmes on iPlayer. DVD and Blu-ray releases of the first series will be released early next month.

The reported discussions focussing on the "timing" of filming a second series would seem to be crucial to the programme's future prospects, with both stars involved in numerous other projects. Baynton has reunited with his Horrible Histories cast-mates for new Sky1 fantasy series Yonderland, launching in November, and is to work with them again shortly on Bill, a new comedy in the Horrible Histories humour vein, focussing on the life of William Shakespeare.

Meanwhile, Corden is currently filming new Disney fairy-tale fantasy Into The Woods, has been promoting his starring role as reality TV star Paul Potts in new movie One Chance, and is expected to return to host an eighth series of Sky1 sports panel show A League Of Their Own. He will also host the BRIT Awards early next year, reportedly for the last time.

Here is a video clip from next week's penultimate episode:

In this interview, the stars talk about the highlights of filming The Wrong Mans Series 1: 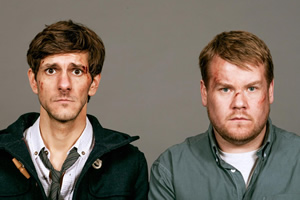