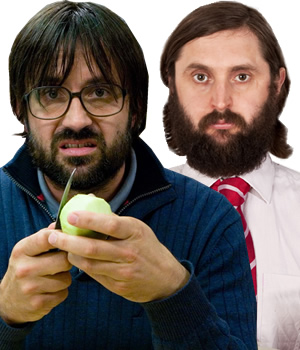 A new comedy game show for television will be piloted in October.

Few details are known about the format at present, but a description accompanying the show hints that it involves members of the public playing games against 'a huge decapitated head of King Boussana' in an attempt to win prizes. Wilkinson has labelled it "a ridiculous new game show".

The format has been created by Wilkinson and David Earl, the latter being the real name of the actor behind the character Brian Gittins.

Joe Wilkinson is perhaps best known to television viewers for his panel show appearances (including as a regular on 8 Out Of 10 Cats Does Countdown), his work as part of Two Episodes Of Mash on BBC Three showcase format Live At The Electric, and as scruffy neighbour Dan in the sitcom Him & Her.

David Earl has performed his character Brian Gittins in various mediums, including live shows. Ricky Gervais, who labelled Gittins as 'one of the best comedy characters of the decade', acted as Executive Producer on Gittins, Earl's 2012 Channel 4 pilot based around the character. Earl may also be known to viewers for playing sleazy Kev in Gervais's comedy drama Derek, and as the confident Steve Cumberland from Channel 4's Comedy Blaps series Cumbo.

The pilot of King Boussana's Brain Game is being made by Avalon Television. The production company is behind a number of established comedy formats, including the BBC Three shows Live At The Electric and Russell Howard's Good News.

The trial episode will be recorded at Chelsea Theatre in London on the 14th October. To apply to be in the audience see our free tickets page