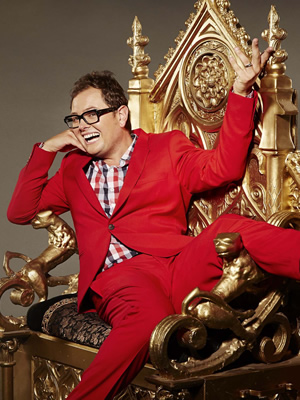 Channel 4 has announced The Channel 4 80s Night, a strand of programming involving established formats being given a 1980s theme.

The plan follows the success of previous programming blocks including Channel 4's Mash Up and Channel 4's Funny Fortnight.

Described as "a night of retro most definitely bodacious fun", the main evening of shows will be broadcast on Friday 20th September, with additional programming over the next two days.

Between the key programmes in the line up, the evening will see sketches broadcast alongside adverts, starring the likes of Paul Daniels, Eddie The Eagle, Pete Waterman and Dusty Bin.

In one sketch Last Leg host Adam Hills will be seen as a teenager in Australia with Neighbours character Madge Bishop, and in another Alan Carr (pictured) will be seen going back to the Channel 4 offices in the 1980s as his younger self attempting to pitch the idea of Chatty Man to the Channel 4 Controller, who will also be played by the comedian.

The first programme, on Friday 20th at 8pm, will be a one-off revival of quiz show Fifteen To One. Hosted by Adam Hills (who is said to be a huge fan of the original format), the show will involve contestants including Jo Brand, Stephen Mangan and Hills' fellow Last Leg presenter, Alex Brooker.

8 Out Of 10 Cats Does Countdown will follow at 9pm, with the comic quiz show given a makeover to fit the time period. Jimmy Carr will host the show with Jon Richardson and guest captain Lee Mack joined by Henning Wehn and David O'Doherty. Vic Reeves will assist Susie Dent in Dictionary Corner and Joe Wilkinson will once again 'help' Rachel Riley.

Alan Carr: 80s Chatty Man will follow at 10pm. Channel 4 says the chat show will get some "80s sparkle in the studio" as guests including singer Jessie J and US actor Matthew Fox join the comedian.

The night will conclude with Rewind The Tube, a programme looking at the rise and fall of the anarchic 80s music show. The documentary will include a look at how The Tube introduced some alternative comedy to TV viewers, with Vic Reeves amongst those sharing their memories.

Saturday 21st will see the channel screening classic films from the 1980s, then Sunday 22nd will see The Big Fat Quiz Of The 80s take over prime-time on the channel. The long-running panel format broadcast an 80s special last year as part of Channel 4's 30th birthday celebrations, but this will be a brand new episode again.

Jimmy Carr will resume his regular host role, with Jim Bowen, Kim Wilde, Tony Robinson and Toyah Wilcox amongst those setting questions for the panel.