ITV2 is to increase its comedy output further, with the latest news being that it has ordered a new sitcom pilot called Cockroaches.

BroadcastNow reports that ITV commissioner Angela Jain has ordered a trial episode of Cockroaches to test whether it would be suitable to become a series on the network's youth-skewed digital channel.

The sitcom, which is described as having a post-apocalyptic setting, has been created by Freddy Syborn. A friend of Jack Whitehall since school, Syborn co-writes Bad Education with Whitehall and has also written gags for stand-up shows such as Hit The Road Jack and Stand Up For The Week. Additionally, he has written plays and recently published the joke-focused book A Good Bullet.

This new pilot will be produced by Big Talk Productions, the company behind many other current sitcoms including Rev, Chickens, Friday Night Dinner and Him & Her. Big Talk also recently produced the Simon Pegg and Nick Frost movie The World's End which featured pre-apocalyptic scenes.

No further details are currently known about Cockroaches. Further plot and character information is expected at a later date. 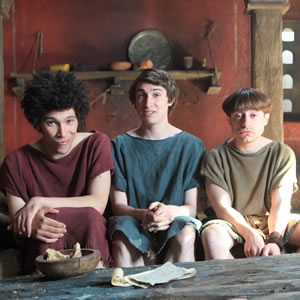 The news of this pilot follows ITV's announcement that it has ordered more episodes of Ancient Rome set sitcom Plebs (pictured) and that the second series of the new sitcom The Job Lot would be screened on ITV2 too.

Plebs, which was ITV2's most successful sitcom launch in its 14-year history, has been given an extended-length second series. The production company Rise Films are currently working on eight new episodes for next year.

Other current ITV2 comedy shows include Celebrity Juice, a 10th series of which has now started; and 'gross-out' panel show Fake Reaction which will be returning for a second series.

To bolster its comedy roster further, in addition to its UK comedies, ITV2 is also buying in US sitcom Mom from Big Bang Theory creator Chuck Lorre; and it has bought the rights to repeat ten series of Two And A Half Men in 2014.