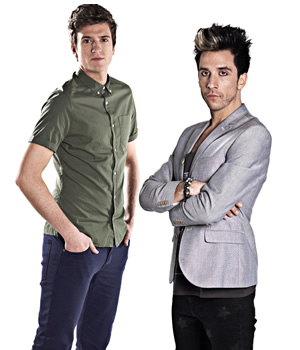 The duo have worked together before, having jointly fronted two series of studio entertainment show Unzipped on BBC Three in 2012.

The BBC says: "Greg and Russell have decided to take their bromance to the next level and are moving in together to host their very own chat show. Each week they'll invite a couple of celebrity guests to 'their place' for an unmissable evening of unique entertainment. Our hosts' charm, hospitality and flair for what really makes a memorable evening is set to guarantee our guests have got plenty to talk about."

The eight-part series will be set in "a surreal, studio version of the duo's dream pad", and recorded in front of a live studio audience.

The show will be produced by Talkback, the company that also made Unzipped for the channel. Dan Baldwin and Neil McCallum who have worked on shows including Never Mind The Buzzcocks and Celebrity Juice will act as the Executive Producers.

Russell Kane will also continue to present sketch showcase format Live At The Electric on BBC Three. A third series has already been filmed for transmission at a later date.

Staying In With Greg & Russell