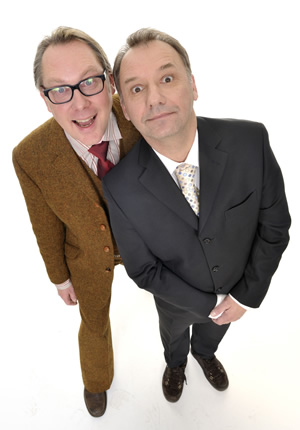 BBC Two has today confirmed the order of a full series of Vic Reeves and Bob Mortimer's new sitcom format.

House Of Fools is a studio comedy set in Bob's grubby flat, which he unwillingly shares with Vic.

The show also focusses on a constant stream of unwanted visitors to the flat. They include lady-obsessed lothario Beef (Matt Berry) and Geordie ex-con Bosh (Dan Skinner, who played Angelos Epithemiou in Shooting Stars).

Speaking about this new project, the BBC says: "Just as they bent the rules of the panel show format, House Of Fools does the same to the studio sitcom. It's half an hour of unadulterated Reeves and Mortimer, uniquely surreal jokes, physical nonsense, daft songs, unimaginable props and impossible situations with a comedy thoroughbred cast."

The series will be filmed in front of a live audience later this year, for a planned transmission in 2014.

Vic and Bob say: "We're back where we belong and over the moon about making a series of House Of Fools for the BBC."

Shane Allen comments: "Vic and Bob are the daddies of daft comedy and it's a total joy to watch two men in their 50s goof about so gloriously. I'm extremely proud to bring them back to the BBC in this hilarious reincarnation."

Janice Hadlow adds: "I'm delighted to be welcoming Vic and Bob back to BBC Two, bringing their unique blend of energy and brilliant comedy to the channel."

Reeves & Mortimer are best known for Shooting Stars, which the BBC axed in 2011 despite good ratings and an outcry from fans. Speaking after the decision, the duo said they felt unwanted by the BBC. They went on to pilot Lucky Sexy Winners, which had a similar premise to Shooting Stars, for Channel 4 as part of its 30th anniversary celebrations in August 2012.

Vic & Bob have previous sitcom experience with Catterick (pictured left), a surreal single-camera show which aired for six episodes on BBC Three in 2004, and a 1992 pilot for Channel 4 titled The Weekenders.

The duo are also working separately on comedy projects. Reeves has filmed two series of comic educational show The Ministry Of Curious Stuff for CBBC with Dan Skinner, and he is due to reprise his role as Joe Pearson in BBC Two sitcom Hebburn later this year. Meanwhile, Mortimer has recently appeared as a panellist on various entertainment shows and has signed up to play a father in Drifters, E4's new comedy drama dubbed 'the female Inbetweeners'. 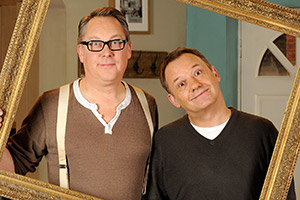