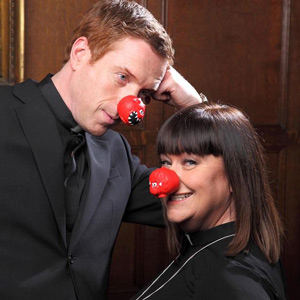 The BBC today confirmed rumours that The Vicar Of Dibley would return to screens - albeit for a single Comic Relief sketch.

To be broadcast during the charity's Red Nose Day telethon on BBC One tomorrow night, the new 10-minute mini-episode will see Dawn French's vicar and her parishoners head to London on a mission to fight for equality in church law.

The much-loved sitcom has long followed patterns of modernisation within the real Church of England, launching in 1994 on the back of the ordination of the first female vicars. Recently the church has faced criticism and great controversy over the continuing struggle to allow women to be ordained as bishops, and this is expected to be the 'equality' focus of the new sketch.

Actor Damian Lewis, famed for his role in US drama Homeland, will appear alongside French as a fellow vicar the group meet in London. Today he expressed he had been keen to play a part in this year's Comic Relief as he had been unable to in the past.

He continued: "Some of my favourite actors are in The Vicar Of Dibley and I grew up watching them on the TV. Filming this has been a bit like filming on stage. We've rehearsed it a bit like you would if you were doing theatre because we shot it so quickly. It's got a lovely atmosphere to it."

Dawn French joked: "It's the first time we've been together for ages, so everyone can witness the rapid deterioration of us all. Since we last saw the Vicar and her parish members, the astonishing and shocking amount of decay is alarming."

She added: "It's very funny and anyone who loves The Vicar Of Dibley is just going to have a riot with this. Richard Curtis has done a brilliant thing in getting all the cast back together."

Curtis, the creator and lead writer of The Vicar Of Dibley, is also one of the brains behind the Comic Relief charity and its Red Nose Day appeal.

The sitcom ran for just three series during the 1990s, but continued until 2007 with sporadic specials. The new 10-minute installment will be the first appearance of the characters since a previous Comic Relief special in which the recently married vicar was seen taking part in new TV programme Celebrity/Non-Entity Wife Swap.

Speculation as recently as October 2012 saw French commenting that she suspected Curtis would write another episode around the ordination of female bishops at some point, but no further hint as to a future for the show had been given, and other cast members appear to be playing down the possibility.

Roger Lloyd-Pack told the BBC: "I doubt we're going to do any more of them. We haven't done [a full episode] for seven years. For those people who like the Vicar Of Dibley sketches, it's probably the last chance they'll get to see a new episode."

Here's the previous special and prior final episode of the series, the 2007 Comic Relief Wife Swap special.