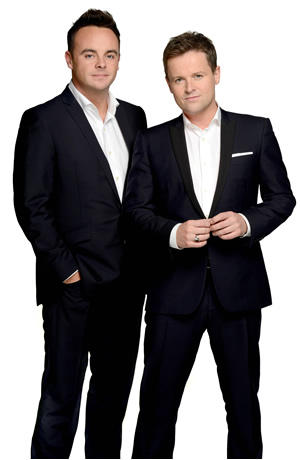 Popular presenting double-act Ant & Dec have been talking further about their plans to create a silent comedy series.

The duo - whose full names are Anthony McPartlin and Declan Donnelly - first announced their intentions to create a scripted comedy project that doesn't involve any spoken words last month.

A source told The Sun in January: "There will be some slapstick, but it won't just be full of physical gags. They have already started working on a script."

The TV hosts - who have won the Best Entertainment Presenter category at the National Television Awards for 12 years in a row and currently present two of the best rated shows on British TV, I'm A Celebrity... Get Me Out Of Here and Britain's Got Talent, have now been speaking in more depth about their plans, for an interview feature published in the Radio Times, out today.

McPartlin spoke to the magazine about how the duo wanted to do something new that wasn't live television presenting. He said: "We've talked a lot about the future this year. We love I'm a Celebrity, Britain's Got Talent, Saturday Night Takeaway, but they're all live shows. The difference between doing a live show and a sitcom is that a sitcom can live on. If you do it well, it can leave a legacy, whereas most of our live work never gets repeated because it's final, it's done, you start again."

He then confirmed they had a particular style of comedy in mind: "We're developing a silent comedy idea at the moment. It will take a couple of years and we might never get there, but it's the way we'd like to go."

It is understood the project does have a high chance of being commissioned. The duo are amongst of the best paid television stars in the country. Both are multi-millionaires and confirmed in the interview they are each insured for millions of pounds against the other dying. The duo also have their own production company, Gallowgate, through which any project could be developed.

Additionally, the pair's current golden handcuffs contract with ITV ends this year, with the commercial broadcaster said to be keen to sign another deal on terms suitable to the duo.

Ant & Dec started out in television together 23 years ago as 14 year-olds acting on CBBC soap Byker Grove. A music career followed, but it was as TV presenters for ITV that they would find widespread popularity and fame. Series they have fronted include SM:TV, Pop Idol and Ant & Dec's Saturday Night Takeaway, the latter of which is to return on Saturday after a four year break. 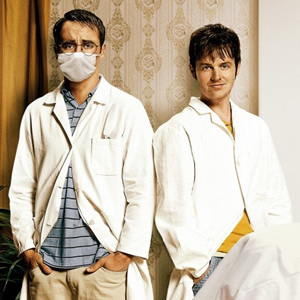 Since Byker Grove, McPartlin and Donnelly's acting career has been fairly minimal. The duo made cameo appearances in Love Actually as themselves, but their only other acting credits are 2006 film Alien Autopsy (pictured) and the one-off 2002 show A Tribute To The Likely Lads. The latter, which was a critical failure, saw them recreate the famous Likely Lads episode No Hiding Place.

The wide ranging Radio Times interview, in which the TV personalities are interviewed separately for the first time, sees the stars admit they're still very close friends, still living on the same street as each other, and saying they'd only ever had one or two major arguments in their career - one over a board game version of Who Wants To Be A Millionaire?.

Donnelly reportedly cried during his interview as he recalled how the duo pledged to always remain friends. He also said "People often ask what the secret of our success is, and I used to put it down to just something that happened, but reflecting on it, I think it's friendship. Ours is a career built on a friendship, not a friendship built on a career."

Ant & Dec tried in the late 2000s to crack America, but returned to Britain unsuccessful. Talking about this, McPartlin said: "We probably will try our luck in America again. It never really worked because the network didn't get behind us; it would need to be the right show. I think we've got one big push left in us, and we'd have to make sure it's worth it. If it happens, it happens, but because everything is going so well over here, we're not dying to break America."

Below is the first part of A Tribute To The Likely Lads.

And below is a sketch from Saturday Night Takeaway in which Ant & Dec fool Simon Cowell by auditioning in disguise for the American version of Pop Idol.