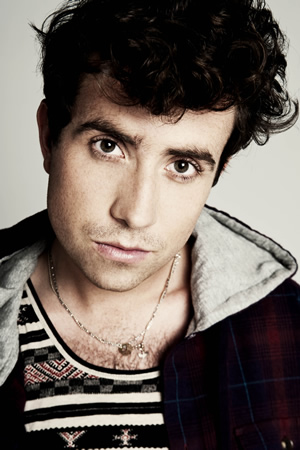 BBC Three has announced that it has ordered Sweat The Small Stuff, a new celebrity-oriented panel show hosted by Radio 1 DJ Nick Grimshaw.

The comedy show will see the host, who is commonly known as 'Grimmy', "share his daily, fickle obsessions with his celebrity guests, putting the teams through a series of games and questions to draw out the really important matters in life."

Rickie Haywood Williams and Melvin Odoom - better known as Kiss FM double-act Rickie & Melvin - will act as team captains on the show, with Rochelle Humes from girl band The Saturdays appearing as a regular panellist.

The weekly topical show has been given a two series run by BBC Three boss Zai Bennett, who is clearly confident that the format will be a success. Series 1, which will consist of eight episodes, is due to start shortly.

A pilot episode of the show was recorded at BBC TV Centre in September, and featured questions such as "Can you de-friend your mum on Facebook?", "Should you acknowledge a fart at work?" and "How soon is too soon to walk out of a date?".

The show is being made by Talkback, the production company behind hit ITV2 panel show Celebrity Juice.

Talkback's Managing Director Dan Baldwin, who acts as Executive Producer on both Celebrity Juice and Sweat The Small Stuff, says: "We are delighted to have secured such outstanding talent on Sweat The Small Stuff. Grimmy is a fantastically exciting broadcaster who is both very funny and a brilliant raconteur. Rickie & Melvin bring a huge audience with them from Kiss FM and their rivalry will be a key part of the show. And Rochelle is such a talented young woman who, unfortunately for Rickie and Melvin, is not afraid to speak her mind!"

Nick Grimshaw comments: "Really excited about my new show! Being the host of a panel show is what self-centred dreams are made of and I can't wait to show off on both the radio and now, primetime television!"

BBC Three's Zai Bennett adds: "Sweat The Small Stuff has been built around the annoyingly talented Nick Grimshaw. We can't wait for Nick to show off and have fun with our brilliant team captains Melvin and Rickie and find out what guests like our regular panellist, pop sensation Rochelle Hume, have been sweating about. Sweat The Small Stuff promises to be quick-witted, topical and silly, but most of all very, very funny."

Grimshaw, who now hosts the high-profile Radio 1 breakfast show, has limited comedy appearances on his CV at present, however he did host an episode of Never Mind The Buzzcocks in the last series (a show, incidentally, also made by Talkback). Below is a clip from this episode: