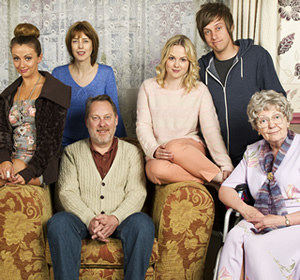 The BBC has confirmed that it has ordered a second series of Hebburn, the hit new sitcom series set in the North East.

The second series will comprise of a further six episodes, expected to broadcast in the Autumn, as well as a Christmas special.

Created by stand-up comedian Jason Cook and co-written with Ideal writer Graham Duff, Hebburn focusses on the Pearson family, in particular their impetuous and ambitious son Jack and his new wife, Sarah.

News of the re-commission had been expected for some time as the comedy quickly picked up many fans when Series 1 was broadcast from October last year. The programme also received good preview reviews and posted ratings figures of over two million, a very healthy figure for a modern BBC Two series and higher than many of its contemporaries.

However, the series drew criticism from limited quarters and real-life Hebburn councillor John McCabe told the local newspaper: "The show has cast a bad light on Hebburn when the complete opposite is true. It's quite sad that people nationally will think this is how we behave - I'm very disappointed and dismayed by it all."

Series 2 will pick up the story from where the first series left off. The final episode saw Jack and Sarah's second 'wedding' being abruptly cancelled when Jack's father Joe had a stroke. The family now face an uncertain future, particularly given that Sarah is also pregnant. However, Jack finally has a secure job in the form of Editor of the Hebburn Advertiser.

Creator Jason Cook, who also co-stars as Jack's best friend, Ramsey, says: "I'm obviously proper over the moon about the second series. Series 1 was so well received that we always had hopes of getting re-commissioned but now it's real! And having a Christmas special really is the icing on the cake; I got quite giddy when I was told we'd got that. There's loads planned for 'Hebburn 2.0' and we can't give anything away - although I can say that we are finally going to find out what Winnie did."

BBC Comedy Commissioning Editor Kristian Smith said today: "I'm thrilled that audiences have taken Hebburn to their hearts as much as we have, and delighted we're making a second series. Jason's creation is a brilliant piece of comedy and we're so lucky to have such a phenomenal cast bringing it all to life."

Series 2 will again be filmed on location in Hebburn and in studios at MediaCityUK in Salford. The show is produced by Channel X and Baby Cow Productions.

2013 is shaping up to be a busy year for Baby Cow, with re-commissions for Alan Partridge's Mid Morning Matters, Moone Boy and Starlings alongside new shows that include Malachy's Millions, Undercover and The Wild World Of Warren.

Below is a video in which Jason Cook talks about creating the series: 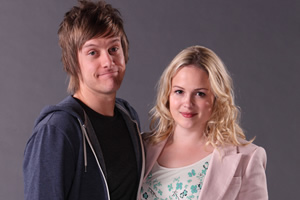