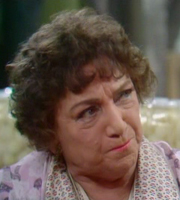 "I can say that without fear of contraception" and "You haven't had the pleasure of me yet, have you?".

Nellie Pledge could belt out a malapropism better than Mrs Malaprop herself. Shackled with the day-to-day running of Pledge's Purer Pickles, Nellie's real aim was to be accepted into Colne's upper echelons of society, just to have tea with the Women's Guild would have been enough, but whether it was Eli wanting a knees-up during the cucumber sandwiches, or Nellie putting her foot in it, as she so often did, it just never seemed to happen.

Nellie Pledge was played to perfection by the late, great Hylda Baker and her constant quest for love at times sadly echoed her true life plight. 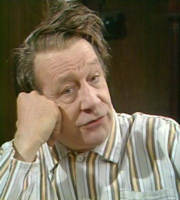 Unless there was promise of direct financial reward, as long as he wasn't up to his eyes in beetroot and gherkins, and he was interviewing for another scantily clad personal secretary, Eli was happy!

Eli and Nellie's constant bickering on screen was, reportedly, helped by Jimmy Jewel and Hylda Baker's real-life dislike of each other when the cameras stopped rolling. 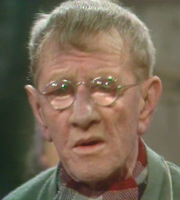 Stan was in charge of the transport division, namely an old clapped out cart and a horse called Storm.

When not in the pickling shed or delivering the firm's freshly preserved produce to the four corners of Lancashire, Stan could often be found lurking somewhere within the Pledge household - and would always appear at the most unexpected, and usually inappropriate, moment. 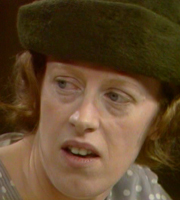 Lily was one half of a very unusual couple, being married to the incredibly aged Walter.

Nellie and Eli's second-cousin, she's often found turning up at the Pledge household every five minutes unannounced. Together Lily and Walter were a constant source of amusement for Eli.

Always appearing in hat and coat, Lily would usually be 'sat sitting' in Nellie's living room sounding off on anything from what a wonderful house she kept to Walter's constant and plentiful medical problems. 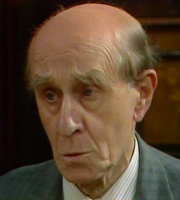 Walter, the ever silent elder husband of Lily, spent most of his time doddering to and from the toilet, or sitting extremely quietly in the Pledge's front room drinking tea and looking mildly alarmed. His bladder problem was constantly brought to the fore by Nellie's asking "Have you been?"

A lot of people likened Walter's appearance in Nearest And Dearest to Hylda Baker's silent stooge "Cynthia" from her many famous stage and theatre shows due to the characters both being absolutely silent throughout.