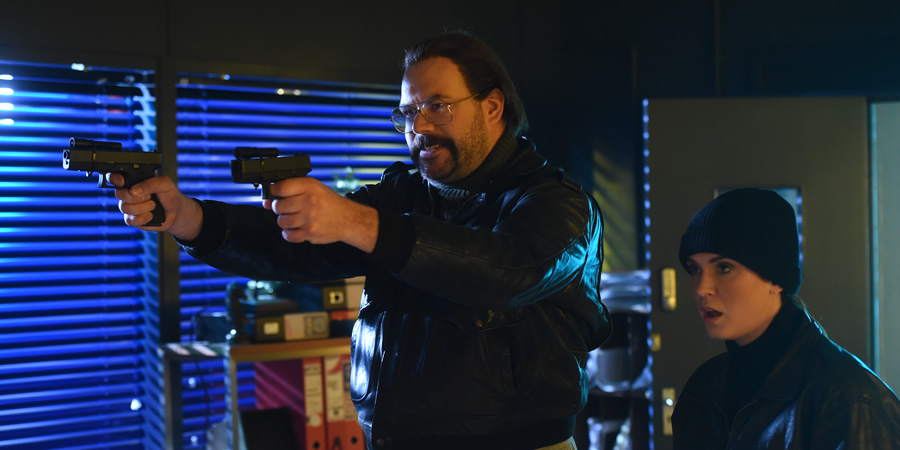 There's been another murder in Successville, but this week the suspect is D.I. Sleet! It's the job of his new rookie, TV personality Vicky Pattison, to try and clear his name and find the real killer.
Preview clip

It's not the birthday D.I. Sleet was expecting when Nick Knowles's body is found in his car. With all evidence pointing towards him, Sleet is arrested and taken to prison. Vicky must now break him out of jail and clear his name.

Vicky Pattison is put through her paces as she and Sleet become renegades and meet three bizarre suspects who might have framed him for murder:

Sleazy Politician Len Goodman: Successville's most corrupt politician who has had beef with Sleet in the past. Now playing by their own rules, the pair kidnap Len and attempt to torture him for answers.

Lorraine Kelly: Sleet's ex-lover, who was emotionally scarred when he called things off. Was this enough motive for Lorraine to frame him for murder? Vicky breaks into her apartment to search for clues.

D.I. Lewis Hamilton: Sleet's main rival at cop school. Did Hamilton have something to gain from getting Sleet sent way? The pair break into the police station to get some answers.

After meeting all three suspects and still no closer to the answer, Sleet has reached breaking point. With a gun to Pattison's head he takes her up to the roof of Successville police station. Can she turn the tense situation around, save the day and clear Sleet's name once and for all?

Sleet and Vicky Pattison kidnap Len Goodman in order to get some questions answered.