Jonathan attempts to impress some American TV executives. Meanwhile Gillian has a new boyfriend and Tom must calm the rather rampant Nancy. 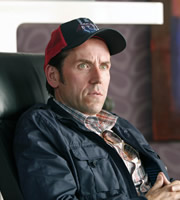 Jonathan wants to get Renaissance off to a good start by getting American interest in the show. He's miraculously managed to bag his stars - Kelly Brook and Alan Dale. He has his hoard of zombies, special effects and grand sets, all the ingredients to impress the American execs, but it's just not enough for Jonathan - he also wants his team to be as Americanised as possible. Cue the arrival of baseball caps, a basket ball hoop in the office and Jonathan miraculously becoming temporarily Jewish!

However, the team have other things on their mind. Gillian is loved up with her new boyfriend who seems to 'love' everything and Tom is set the task of calming a rather rampant Nancy.

Predictably Jonathan's plan to woo the American executives starts to unravel and cracks start to show when Jonathan injures a member of the crew by throwing a brick at his head after mistaking it for a fake prop.