There's a fiery end to Series 5. 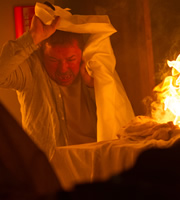 In a fiery finale, the truth behind landlord Trevor's scheming is revealed, throwing the residents of Mount Pleasant into grave danger.

When a fire breaks out and blazing flames consume the pub, broken hearts, jealousies and marital woes are all put aside as lovers, friends and bitter rivals pull together to save the lives of those trapped inside.

Katie Redford was credited in this episode but did not appear.