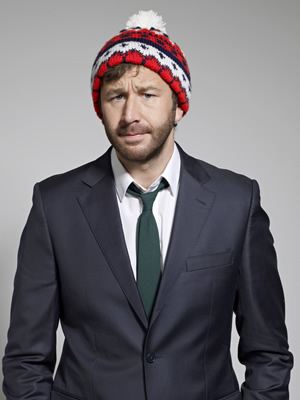 Chris O'Dowd talks about Series 2 of his hit sitcom in this interview...

Hi Chris. Going back to the beginning of Moone Boy, where did the idea to write a story featuring an imaginary friend come from?

I'm not sure our initial idea was to have an imaginary friend. We knew we wanted to do something about me growing up. We were looking at ways to put a bit of magic into that and I liked the idea of playing somebody who just comes in and out of the show. I think all that just came together, though I can't remember when we first said he could be an imaginary friend. I'm glad that we did.

What's David Rawle, who plays Martin, been like to work with?

Well, other than the consistent scene-stealing that he does, he's a treasure. He's a very smart kid, very easy to work with.

Does this series feel a bit more grown-up now Martin's off to high school?

Yes, it does. He has his first crush and he's getting to know the ways of the world a little better. He's not necessarily any brighter so it's still difficult for him. But, yeah, he's definitely aging. He also gets his first girlfriend and has his first kiss.

Did you and co-writer Nick Vincent Murphy plough your own memories for inspiration?

Yes. I think plough is the right verb. It was like digging up shit. Oh god. I was so old when I had my first kiss, like 15 maybe 16.

So Martin got in there a bit earlier?

Yes, because he is far more charming than I was at that age.

And what sort of teenager is Martin going to become? What does that mean for Sean?

There is going to be a time when he's too old for Sean. I'm very interested in getting the story to 1995 because I definitely want to do something with Britpop - Blur versus Oasis. I have this image of Martin being a big Blur man and Padraic having the Liam Gallagher haircut. I think he's going to turn into that kind of kid. I can't imagine that's good news for Sean as time goes on. 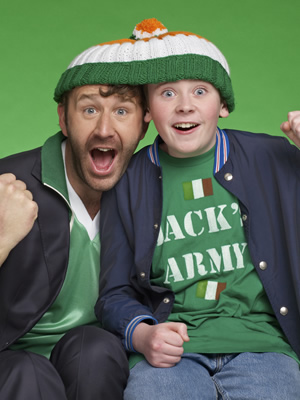 The series starts with Italia 90. How big an occasion was that for you?

It was our 1966. British people just don't realise, that was our golden period. When you were getting knocked out in another penalty shootout, we were winning penalty shoot-outs. We were bringing the nation together. They were 11 heroes.

It's weird because it was such a huge thing. It was such a huge World Cup, so iconoclastic: Gary Lineker telling Bobby Robson he needs to watch out for Gazza. It was amazing stuff. That's why we wanted to use Nessun Dorma, it's one of the reasons we remember that World Cup so well. It was a perfect framing for it. What do you remember from the '94 World Cup? Nothing.

That's right, they were so hot. John Aldridge on the touchline. It was full-on.

A big part of the show's humour and charm comes from nostalgia, from Super Mario to Enya. Do those jokes come about organically, or do you think 'I want to write a joke about Toto Schillaci'?

I think it's a little bit of both. That big Enya bit wasn't even in the script, but when we were shooting it out on the water on the day I realised it would be very funny to try and make a music video. The kids hadn't heard of Enya. It was me with my iPhone out, showing them Enya and Nessun Dorma. They had to learn the words, it was so bizarre. So that just came about, but at other times we'll know we want to do something about Schillaci. Likewise, I thought the Maradona/Madonna joke would just be funny to see.

The rest of the family have bigger roles this series. What can we look forward to seeing them get up to?

Fidelma is about to give birth. Dessie wants to propose and does so in spectacular fashion. That's a big element of the series. A baby. A wedding. Sinead has to read at mass. Big life moments. So much of it has just come from my life. When I was 13 my sister had a baby. It's all stuff I can just remember very well. 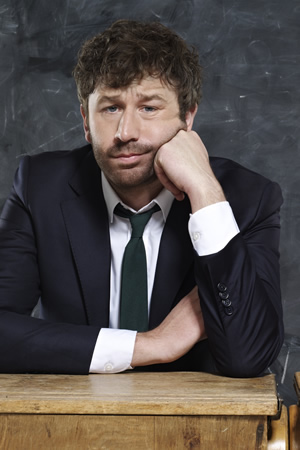 How does your writing partnership with Nick work?

We outline an episode or two at a time. We need three stories per episode, an A, B and C story. We'll decide what those are then we'll decide exactly what each episode's going to be about and then we actually split up and don't really spend any more time together in a room. I'll write seven pages and he'll write seven pages then we'll swap. We edit each other's stuff as we go. It's great. Nick writes quickly which means I'm always getting a good kick up the arse to get on with it. Being under pressure is terrific motivation.

Had you done much writing prior to Moone Boy?

None really. I'd never tried to get anything produced or written anything to show to anybody, so this was really my first go. It was tricky at first but because I had worked on The IT Crowd for so long I had seen the process happening. And Graham Linehan is one of the greatest comedy writers. I did write little bits in the rehearsal room as we went along and I watched Graham create such amazing stuff, so I felt like I was fairly well educated in how to go about doing it.

You're going to be writing Moone Boy books. How is that going?

We're nearly halfway through already. It's going great. It's so fun writing stuff that you know you won't have to film later. It frees you up. It's for a younger audience, eight to 12-year-olds, so we can really explore his imagination. We actually set it before the first series starts. Martin is about ten and it's before he has Sean so it's the process of him finding an imaginary friend. He tries another one initially that doesn't really work out.

And away from Moone Boy, you're going to be making your Broadway debut soon. Are you looking forward to that?