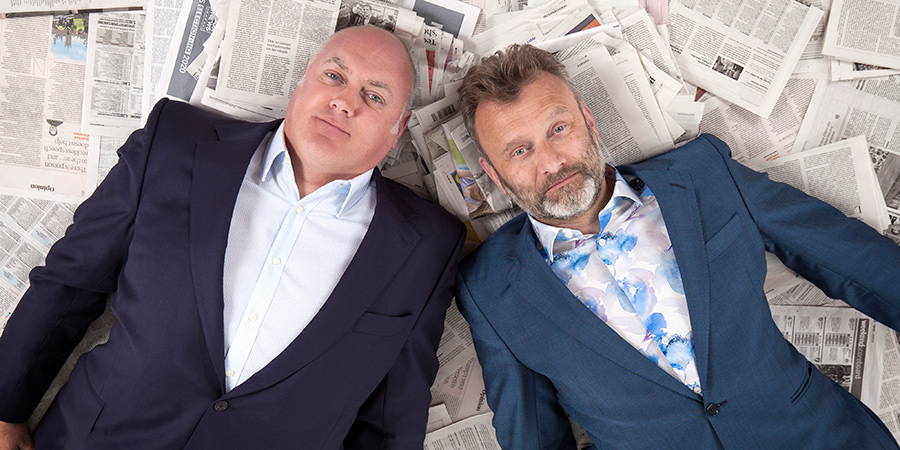 Series 20 of Mock The Week starts on BBC Two on Thursday 13th May at 10pm.

In their amusing press announcement, the producers say: "As nationwide restrictions end and the country begins its tentative journey back to normal life, TV chiefs have further increased rising morale by setting out a 'cautious but irreversible' roadmap for the return of popular topical comedy show Mock The Week to BBC Two next month.

"According to plans to be announced shortly, the green light has already been given for Series 20 to begin broadcasting from Thursday May 13th at 10pm with the public actively encouraged to indulge in responsible levels of Dara O Briain and Hugh Dennis in their home bubbles or small groups outdoors.

"Pointing to a graph that shows a clear bottoming out in levels of amusement since Mockdown began in early February, a leading boffin was adamant that the gradual time frame was still vital: 'Everybody wants to see jokes about Dara looking like the Megabus man, Rhys James being a schoolboy and Maisie Adam living in a dip as often as possible, but it would be frankly irresponsible at this stage to allow more than six half hour episodes in May and June and a further six plus an end of year special in November and December. Let's just be glad and not greedy.'

"Details of how the new series might break down in real terms were somewhat sketchy but all the signs are that Ed Byrne, Angela Barnes, Rhys James, Kerry Godliman, Milton Jones, Glenn Moore and Maisie Adam will continue to be successfully rolled out to all age groups at regular intervals. Ahir Shah, Catherine Bohart, Laura Lexx, Darren Harriott, Ivo Graham, Eshaan Akbar, Athena Kugblenu and Felicity Ward will all be given opportunities to build on their promising results in last season's trials and, as ever, there will be room for experimentation too:

"'It's early days, but we're very excited about the potential of new prototypes Alasdair Beckett-King, Kae Kurd, Robin Morgan, Evelyn Mok and Chris McCausland' said an insider, speaking via carrier pigeon from the programme's Covid-secure island hideaway. 'There's an element of risk involved, of course, but the positives hugely outweigh any negatives. We just want to be a welcome distraction like winning the Ashes, Susan Boyle and global economic meltdown were during the swine flu pandemic'."