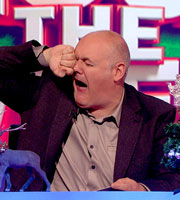 The Mock The Week Christmas special is guaranteed to be as irreverent as ever. As well as the usual hilarious mix of out-takes, best bits and heaps of unseen material, there's a real festive feel (well as much as Dara and co. are capable of), ranging from the traditional Christmas quiz and Scenes We'd Like to See, to a seasonal newsreel from Hugh Dennis and a guest appearance from a somewhat sinister teddy bear.

There are great contributions from the likes of Josh Widdicombe, Holly Walsh, Rob Beckett, Katherine Ryan, Ed Byrne, Romesh Ranganathan and Sara Pascoe, and even something a little bit different in the opening titles too.

Mock the Week panellists meet and talk about a programmable bear.

Unlikely things to hear at Christmas

The panellists suggest unlikely things you would hear at Christmas.