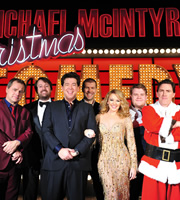 Michael McIntyre presents a special Christmas edition of his Comedy Roadshow, as some of the biggest stars from the world of stand-up and comedy perform live in front of comedy fans and a celebrity VIP audience at London's Theatre Royal, Drury Lane.

Michael McIntyre: Who's Moved the Scissors?

Michael McIntyre shares his frustrations with using sellotape and scissors at Christmas.