Josh has been dating Holly for three months and now he's about to meet her family. 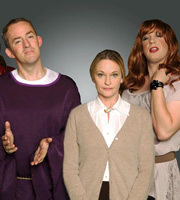 Holly's dad Ken is the leader of his own religion. He thinks of his house as his church and is allowed as many wives as he wants. Mum Pauline's OCD condition means everything has to be clean, precise and in order - this includes making Josh count all of his peas at dinner.

Ken's second wife is Fillipa, a Russian cleaner he bought off the internet and she's in constant competition with Pauline for Ken's attention.

Brother Chris, or Christine as he likes to be known, loves X Factor and dreams of dating the small one from JLS. During his five hour ordeal, Josh endures Holly's brother's X Factor audition piece, and is put on the spot as to whether he wants to marry Holly, right there and then!