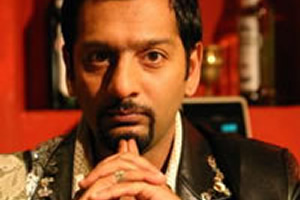 'Manager man' of The Spice restaurant, Nitin is the one in the suit, the Magoon in the driving seat, notionally in charge at the Spice, and literally the man behind the wheel of their ubiquitous Merc. The man with the plan... only the plan usually goes wrong.

Nitin will tell you he is top of the Magoon's pecking order, and the boys will tell you this is a position he topples haplessly head first from each week, unless one of the Magoons pushes him first. Nitin has two nemeses: Alan, the chef at The Spice, and his dad. 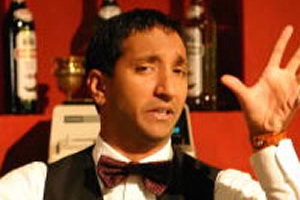 Paul loves to hate Nitin and Nitin loves to hate Paul. Paul is Welsh, and a waiter at the Spice. And much to Nitin's disgust, Nitin's dad loves Paul as Paul is everything an Indian parent would want his son to be.

Paul is frequently mystified by the Scottish people and their quaint ways, and Nitin frequently tells him he is a Welsh testicle head.

Paul sits in the front seat of the Merc except when Nitin is having a hissy fit and doesn't let him. The only time Nitin and Paul truly combine is when they cut Hamish down to size... 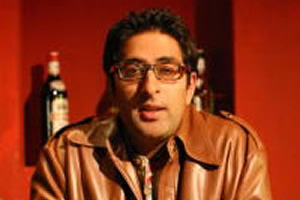 Surjit is the most chilled out of the Magoons. When he is not boring them to death with long anecdotes he tries to bring peace and tranquillity in other ways, all whilst wearing colourful sub-Hawaiian type shirts.

Unlike his shorter, slightly more overweight brother, Surjit is much quieter about his vast knowledge of world trivia and his ability to use the word "ecclesiastical" in open conversation.

Surjit sits in the back of the Merc and is a waiter at The Spice when Nitin has messed up and needs help. So he is often a waiter. 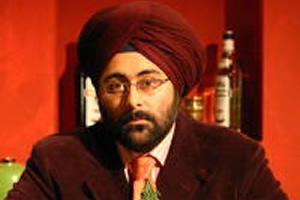 Hamish is Nitin's cousin and Surjit's older, but not necessarily wiser, sibling. He is, however, the King of Trivia, specialising in pop and the eighties.

Paul will tell you Hamish is a gay man trapped in a gay man's body as he likes to wear pink kilts, pink turbans and pink marigolds... often at the same time. One day Hamish will come out and shock everyone by admitting he is straight... well, maybe.

More cowboy than Indian, Nitin's dad has a taste for quirky clothes and line-dancing. He is perpetually embarrassed by his son's inability to manage the restaurant and just wishes he'd be more like that lovely Welsh waiter Paul.

Alan is the one who holds all the cards at The Spice, and God help anyone who offends him or gets in his way, let alone messes with his beloved Angel Delight. Together with Nitin's dad, Alan the chef keeps The Spice in business, often in spite of the efforts of the boys.