Mapp is still reeling from Lucia's victory at the summer fete. 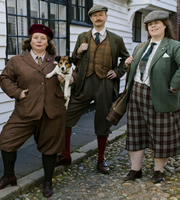 Mapp is still reeling from Lucia's victory at the summer fete and is left to watch disconsolately as the town residents flock to Lucia's little dinner parties across the street. Meanwhile all of Tilling are hard at work on their entries for the Summer Art Exhibition, one of the highlights of the Tilling social calendar.

When Lucia and Georgie lay out their intentions to submit their sketches Mapp snaps and begins an underhand counteroffensive to keep them out. It's a clever move but subterfuge rarely lies hidden for long in a place like Tilling. Lucia can see Mapp's little game and is more than happy to play her at it.

Faced with a very public shaming Mapp is forced to back down. She returns to Wasters emotionally bruised, an outsider in her own town with nothing but marrow jam for company. That is until she receives a totally unexpected and rather exotic guest whose introduction to Tilling may be just enough to put Mapp back on top. Whether she likes it or not Lucia's got a full scale war on her hands, she'll have to sink to Mapp's level if she wants to keep her crown.

Meanwhile Georgie receives a mysterious delivery of luggage, golf clubs and a rather gruff and troublesome dog. Something's afoot and there's many a raised eyebrow as he takes a rather startling new interest in golf.