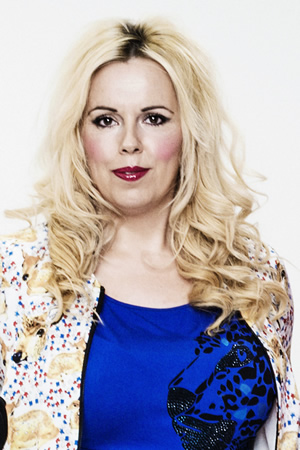 Stand-up comedian Roisin Conaty has now turned her hand to acting too. We talk to her here about her first major role...

Hi Roisin. You play Jo in Man Down. What's she like?

She's 'bat shit' crazy. She's other worldly I think - she sort of lives in a world of her own. She's not a bimbo but she's also not the sharpest tool in the box and she's an extreme optimist and everything just sort of bounces off her.

She lives in her own world and doesn't acknowledge the realities that she doesn't want to acknowledge. She's best friends with the guys - I think they sort of hate her a little bit, she drives them mad, but she's like their old friend. You know you have that old mad friend who you think 'I don't know why I'm still friends with them'?

How much of you is in Jo?

Not that much really. Maybe her optimism... I mean she loves starting new things, she always has big plans and not really seeing them through. I think everyone can relate to that on some level.

I'm a bit ditsy and a bit clueless sometimes, but no she's quite different to me in most respects, but she's really fun to play.

Jo looks like a really fun character to play - did you enjoy the experience?

I did, I had so much fun filming! Her outfits are like the end of the world - every day was an adventure in the wardrobe alone. However, there was a salsa dress - I wanted to burn it by the end. It was just this really tight salsa dress, rubber on the inside and gold - I'm a size 14-16 so I was like 'argh this salsa dress again!' But it was so much fun to play and it was such a big shoot.

Greg and I have known each other for going on ten years and we're old friends, and I've worked with Mike Wozniak before, so it was such a laugh on set the whole time. I think we are similar to our characters in certain respects, for example Mike's quite serious etc.

What I think is really interesting: the character Dan, I think, is half way between Jo and Brian, and that makes it really nice. Jo is who he doesn't want to be, but he's similar to and the character Brian is who he wants to be like - this functioning adult. It was a really, really lovely experience. 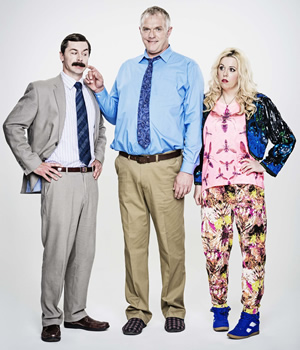 Jo is stuck in the career doldrums. Bearing in mind the nature of your profession, have you ever had long periods without work?

Not really. I haven't been stuck for long periods without work ... Jo's older - she's older than me even, but I think everyone has that, not really knowing what to do thought... and I was one of those people who was always up for trying something.

I think with Jo, she's always going to try and find something that she likes. I've had some mad jobs, some weird kind of 'what am I doing here?' moments. I always worry what I would have done if I hadn't found comedy. I've worked in a construction firm, a fashion company... all things where I wasn't very good at my job.

I think the most bonkers and tiring job I've ever had was in my teens where I worked in Woolworths in the Christmas period. That level of tired I've never really felt since. The four days before Christmas in Camden in Woolworths - it's like something out of a horror film. It's just insane and there was the same Christmas songs on relentlessly - it's like a nightmare.

So you know Greg, do you think he wrote the role with you in mind, or did you have to audition for it?

I still had to audition. I don't think he wrote it for me in mind but I think obviously once I was cast, people get to know your strengths and weaknesses in terms of performance.

It was such a great thing to get and I think it helped that we do know each other, and how to bounce off each other and stuff like that, which meant on the day we were able to have fun and quite easily bounce around things.

How was the audition process?

It was quite funny actually - and this is why I think I did get the part, as I am probably similar to Jo - I was called in for a second audition... it went ok, but it wasn't as good as the first and there were lots of actresses waiting to come in, and I left the audition room, and the building was like a glassed office with a courtyard, and you know the grates they have across the door?... So I had pink heels on and one got stuck in the grate, so I couldn't move. The whole casting team, the producer etc, are waiting for the next actress but they can't because I'm outside the door trying to wedge my shoe out. It took about half an hour and I thought 'I can't leave as I only have one shoe on'... and then when I got the part, Greg sent me a photo of the shoe saying 'Well done, you've got the part.'