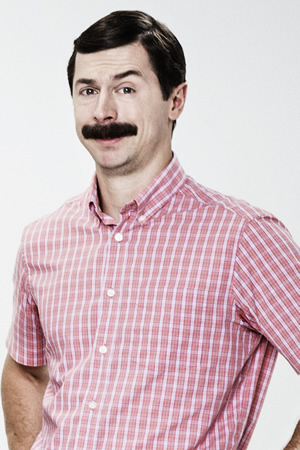 Here's an interview with Mike Wozniak...

Hi Mike. You play Brian in Man Down. What's he like?

Brian is a complicated beast. On the surface he's has this suburban provincial life - he's very much a 'lego man' type. He's a financial advisor with a wife (who he fears and too many children) and is a stressed, tired and 'dressed by Marks & Spencer' type.

He has Dan and Jo who are incredibly chaotic creatures and they're all friends from way, way back. They sort of look at him at times as a sort of surrogate parent as well, so even in his down time when he should be relaxing and having a nice time, as far as he's concerned he's trying to sort out people's crap.

Brian's always on the cusp of a breakdown - it's bubbling under the surface at all times. He's an inch away from total collapse or a total act of madness, and in every episode he's fighting against that - he's fighting against what his friends are doing to themselves and to him, in the hope that he doesn't crumble and fall to pieces. Occasionally he does fall to pieces.

How much of you is in Brian?

Hmm tricky... that's a tricky one to ask. I would like to hope and think and pray that it's not very much, because I think actually being Brian would be quite hard in life.

I don't think I'm quite the control freak that Brian is. There are elements of it. I think everyone has elements of Brian in them. That's why I think I like Brian and why people will like Brian hopefully, because everyone's got a little bit of Brian in them - even a tiny amount - and everyone knows a person who is a Brian as well.

It's that thing of seeking control and peace but not being able to attain it. I've got a bit of that but I don't think I'm as caught up in it or as tightly wound up as Brian. Well I hope I'm not anyway. Also, if I do lose it, I don't think I'd go to the extremes that Brian is capable of, at least I've not yet in my life... we'll see.

Is it more difficult, having to play a character who's less extreme than the others?

No, it's lovely. There's times when he's effectively a kind of straight man because they're more chaotic, but it's fun. In the same way that people enjoy playing villains, it's quite fun playing the straight man who wants to exert control on total chaos. It's a lovely thing to play.

Did you enjoy the experience of filming? Is Greg fun to work with?

I loved it! This is my big first job of this nature - screen-wise I've done lots of pilots and tasters that haven't really gone anywhere, so it's exciting for me to be involved with a project that's happening and has gone to series in the first place. But I'm also thrilled that my first series of something is this as well, because I think it's really good and really funny so it's a dream job really. It's been a complete dream gig, it's lovely.

Do you think laughter is the best medicine?

Well yes, I think laughter is joyous - laughter is crucial. I think that's why I love comedy and that's why I'm in comedy in the first place. There isn't much I like doing more than completely pissing myself with laughter. There aren't many more happier moments in life than when you're laughing, so trying to make people laugh yourself... To do a job where you're trying to make people laugh and you're laughing all day is ideal. 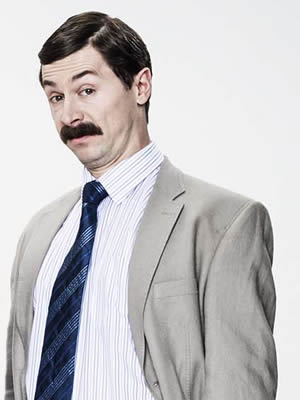 Was it quite hard to keep serious on set then?

Yes, there was times when it's completely nightmare-ish, especially as Greg kept re-writing things and doing extra little bits and adding little bits here and there. He would discovers new thing in the performance so he would often do something you hadn't expected at all or rehearsed, and you've got to keep a straight face because you're the straight guy.

You're not supposed to burst out laughing in the middle of a scene when there's 35 crew around you who want to go home and see their families... and you're messing up a shot because you're laughing. That is a challenge. That was the only challenge because otherwise it was lovely.

You have a particularly luxuriant moustache. When did that arrive?

Thank you. Yes the moustache appeared for the first time about 10 years ago and it was grown as a joke of course, but I discovered I quite liked it. I preferred it, and my wife prefers it. I got married in it and she won't come near me when I'm clean shaven.

We had a lot of children on set in Man Down and they kept asking me if it was real. I wasn't quite sure how to take that.

Who are the owners of your all-time top three moustaches?

Ah that's a good question. Hmm, top three moustaches of all time... Salvador Dali for sheer exuberance. Who else? There's obviously Magnum PI. Tom Selleck's Magnum PI is a classic, and it's very similar to mine. I welcome it because I'm a stand-up - I get heckled with Magnum PI, but I'm more likely to get Starling, which again is a similar style, but is much a misused moustache.

Are you more at home doing stand-up or acting? Are the two similar?

I prefer comedy acting definitely. I love stand-up but I think I'm just at home a bit more with comedy acting, which is possibly why I love it more.

Stand-up is more extreme, because when it goes well there's no feeling quite like it in the world; it's complete exhilarating and incredible... but when it goes wrong - Jesus Christ, does it go wrong! Whereas with comedy acting you can get near to those highs but you're never going to quite hit those depths, so I prefer it. It's safer.

Also, I think the main reason I like comedy acting more than stand-up is because I'm a collaborator really; I think I work better when I'm collaborating with people and I prefer it working with other people.

What are your ambitions?

More of this stuff - I love it. This is all I want to do - perform comedy and write comedy and have a nice old time. I don't particularly have ambitions for great power or wealth I just want to enjoy myself really. This to me is not work, it's just a joyous way to spend your time if you're going to earn a crust, so this just more of this stuff.

More comedy - writing it, acting it, stand-up'ing it, whatever'ing it, and especially more Man Down if it happens.