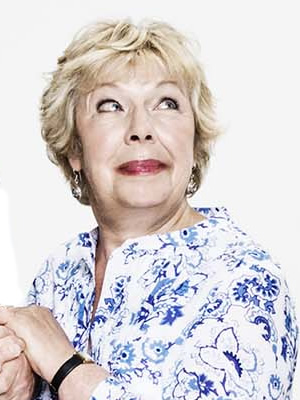 Gwyneth Powell used to play a teacher in Grange Hill, but in Man Down she is taking on the role of a mother of a teacher...

Hi Gwyneth. You play Dan's mum in Man Down - what's she like?

She's an adoring, quite controlling mother who, I think, would like to get him married off in one sense, but in the other sense loves having him at home and loves fussing round him - he's her big baby.

The family consists of two children but we don't see much of the sister and the grandchild who's happily married and living somewhere else, so the nucleus of the family is her big boy and her husband.

She's possibly based on Greg's own mum: very supportive, finds him very funny, finds his strange lack of coordination and clumsiness appealing, rather than irritating.

Dad and Mum have completely different approaches to him. Mum is completely unaware that Dad has this completely sort of psychotic side, because he wants to take him [Dan] away from mum's apron strings really and make a man of him... to get rid of him from the house so they can have it to themselves. Whereas she wants to bake for him and look after him as though he was a six year old still.

What was it that attracted you to this role?

The scripts, which are laugh out loud.

It's a character driven sitcom, there's lots of physical comedy in it, so visually it's very funny. All the characters are quirky even the ones who appear to be quite normal, like the mother - there's quirkiness about her, and so they're interesting to play.

It's a big cast but, however small the part, there's something there for an actor which is the sign of really good writing. There's been a dearth of that, particularly in comedy I think, so I think this is really exciting.

You play opposite Rik Mayall and Greg Davies - is that as much fun as it sounds?

It's been a really fun enjoyable... I mean Greg has pushed himself so hard. I feel quite protective, as if I were his mother. I know it's not always an indicator that the public are going to find it as much fun as cast and crew, but in this case it's different.

I mean I think it's very different, I think people will be fascinated by it hopefully and want to tune in the next week and the next week. I don't think there's a duff episode in the whole thing and it just gets more and more manic as it goes on.

Does comedy feel like a different skill to doing drama?

I've done lots of comedy and I'd say it's more difficult actually.

Timing's more difficult, and it's always more difficult on television as you haven't got a live audience to time gags with... but you have got the crew of course, and they're a fairly good indicator of what's working and what's not working.

I've always enjoyed comedy because it feels more like playing than working really, although it is quite tricky to do, and you have to have a lot of concentration. Sometimes if you have to do a scene 10/15 times over from different angles, or for technical faults, then it can be quite difficult to still be finding the bubble that you need for comedy.