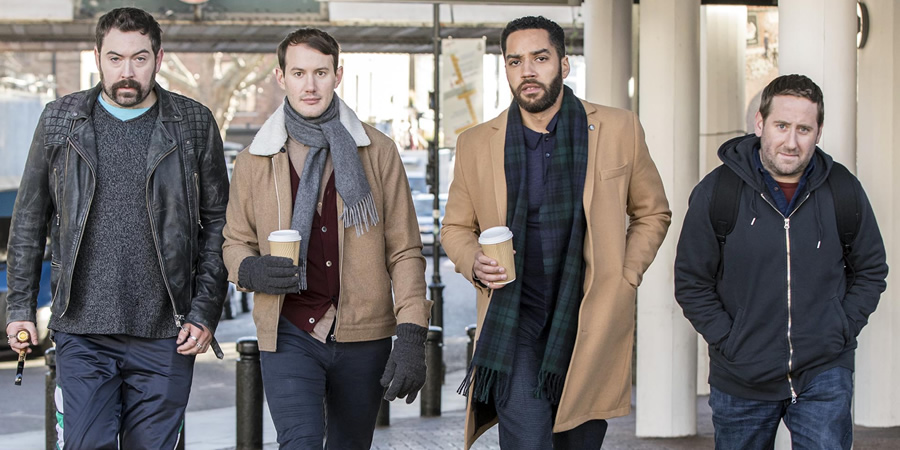 Tell us about Loaded...

Jim: Loaded is an eight part comedy series about four friends who invent a game for smartphones and sell it for 300 million dollars. It's about how they deal with their immediate fortune and the fall out of that.

Nick: It's a light-hearted comedy drama series about four friends that become millionaires! That's how you do it! Boom!

Can you each tell us a bit about your characters?

Nick: My character's called Watto, essentially I'm the guy that's in charge of the art department. Erm, what else?... Who am I?!

Nick: Yes, when he becomes a millionaire his previous issues turn into other addiction issues, such as excessive impulsive spending and giving lots of money away. More generally speaking though, I'm like the Michelangelo of the group.

Jonny: Ewan is Donatello! He is the coder who made the app, which is a thankless task. He's a kind of repressed, middle-classed, passive aggressive, loveable, unsavvy bozo. He finds getting wealthy very socially awkward and feels guilty about it. Also, I'd say he's the best looking of the group! Only kidding...

Jim: Josh is Leonardo in the sense that he is the natural leader of the group, only because he's kind of taken the group under his wing, they were formed on his turf, they made the game in a caravan on his driveway. His parents have essentially been foster parents to them all and looked after them and made them roast dinners every Monday. They've become part of his extended family and he sees himself as a matriarch.

He's a constant worrier, the moral compass. He's extremely anxious; it gets in the way of his whole life and the money exacerbates that. He's a nice guy, he has a heart and he's in love with a girl and there's a kind of cat and mouse situation going on, well it's mostly just cat!

Samuel: Leon is like Josh's adopted brother, they go back a while and are sort of the parents of the group. He's the Raphael of the gang, the one who...

Samuel: Give me a break! Yeah, he's cock-sure but not very confident; he's the one that sells the game and forges the deal that turns them into millionaires.

Jim: Leon enjoys the money the most.

Samuel: Yeah, he doesn't have any moral issues with being rich, he can be a bit of a knob... 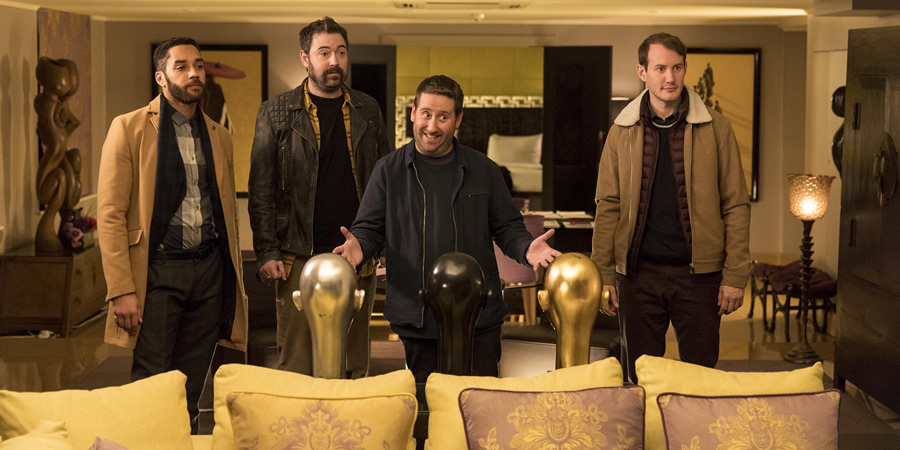 Which brings us nicely to the next question... Are you anything like them?!

Jonny: I think we all are actually.

Nick: Well, I've never given up the crack! Joking.

Jonny: Yeah, saying that we are like them is probably most offensive to Nick actually.

Jim: I think Nick's character is the most extreme, but as far as Josh's foibles I can say I share a few. I'm not very good at knowing what to spend money on. When we were filming I spent almost the whole of the second block um-ing and ah-ing about whether to buy a football season ticket or not and that was kind of Josh-esque.

Jonny: Yeah, that was quite Joshy. And it went on for a while mate...

Jim: I bought it in the end, not in a spending frenzy or anything but just because I wanted to spend time with my Dad which is really rather Joshy.

Jonny: Yeah, that's true actually. But you know, you bought a few things during the shoot, didn't you? You bought your big rug, your massive rug!

Jim: I didn't buy that rug, it has nothing to do with me that rug, mate. My wife worked on the show as well, she works in costume and during the shoot she bought a rug for our room and it was the biggest rug I've ever seen.

Jonny: It was bigger than the room, it was undulating!...

Nick: She was hired before you were, wasn't she?!

Jim: Yeah, a month before me.

Nick: That's actually pretty standard for you isn't it?!

Jim: Yeah, always the last person to be cast!

Nick: I was very relieved because people just assume that I am the character I play in Uncle and I'm not really anything like him, so I wanted to do something completely different. I thought it was great that it was so different to my Uncle character but then I realised that Watto is actually me! In Loaded my character buys all sorted of tat and then I'd go home at night and just be confronted by a wall of Bobbleheads! [collectable toys]

You spent the shoot messing about in a mansion, driving Ferraris and mucking about with helicopters, yachts and mini motorbikes. Did you feel like real life millionaires?

Samuel: It was better than being a millionaire because it was guilt free! One of the things in the show is the shame and embarrassment they feel, whereas in this you could have all the fun without that!

Jim: Jonny and Nick had an immense Nerf gun battle. They went off and had a great afternoon, they were like kids, they came back sweating, they'd had a glass of squash each. We were like, "boys, slow down!"

Nick: We had these motorised guns and... actually, I don't know what Sam and Jim were doing?

Nick: We went downstairs into the basement, this concrete bunker in the mansion we were filming in and just had this massive battle. We were hiding behind pillars and shooting at each other, it was just brilliant!

Jonny: We were breathless with giggles, we were like [does high pitched giggle sounds]... panting.

Nick: I had no friends growing up!

Nick: Nah, course not! Just adding some drama for the people at home aren't I?! No, I had no brothers growing up but on this show I felt like I had three. 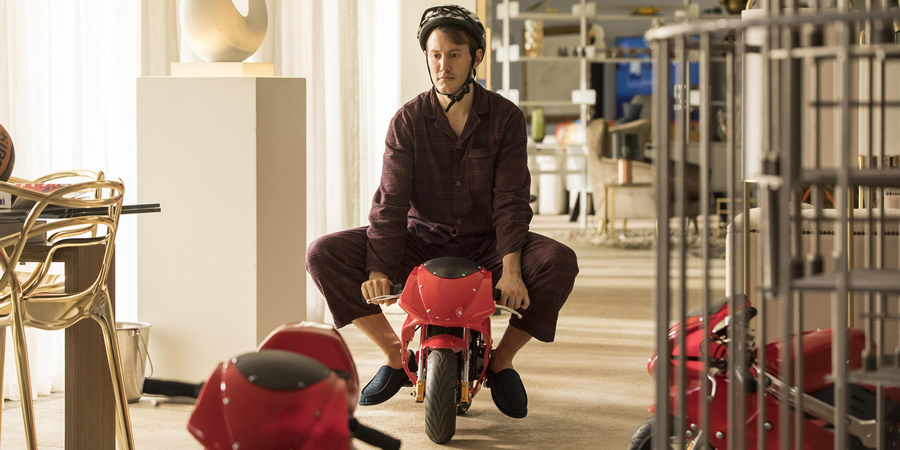 Did you have any stunt doubles?

Jonny: No, I did my own stunt at one point when I jumped off the yacht we were filming on and it was genuinely quite scary! I had to jump off a... I was going to say 20 foot, but it was actually a lot shorter, platform onto some mats. There was a point where I was going to have a stunt double and I just said guys, forget about it! I've got this! I really enjoyed it.

Nick: And I had that scene where I get chased by a dog and I did that myself! And then I couldn't move for the whole weekend.

Samuel: I had someone doing a lot of the driving in the Ferrari which was quite nice because the thought of driving a Ferrari is quite cool and then you get there and they say "This costs a quarter of a million pounds! Behave yourself." And you go "I, er, just might not want to do this!"

Jim: I didn't have a stunt double, I said before I took the job I didn't want to do anything physical! Not really.

Was corpsing a big problem on set?

Jim: Yeah, I have a thing with Jonny. He just makes me laugh.

Jonny: I corpsed when it got tense, when we only had one or two takes to get it right. Especially if there was one with Mary McCormack [who plays their boss Casey] and it was really near the end of the day. I kept saying this line wrong; it was meant to be "kidney bladder pack" and I basically went "Blaggerduck" - I couldn't take it! Mary was really professional and I just couldn't take it.

Nick: I've never had so much fun filming, but that was the thing with this job we just laughed every day.

Jim: We really got on. It was great! 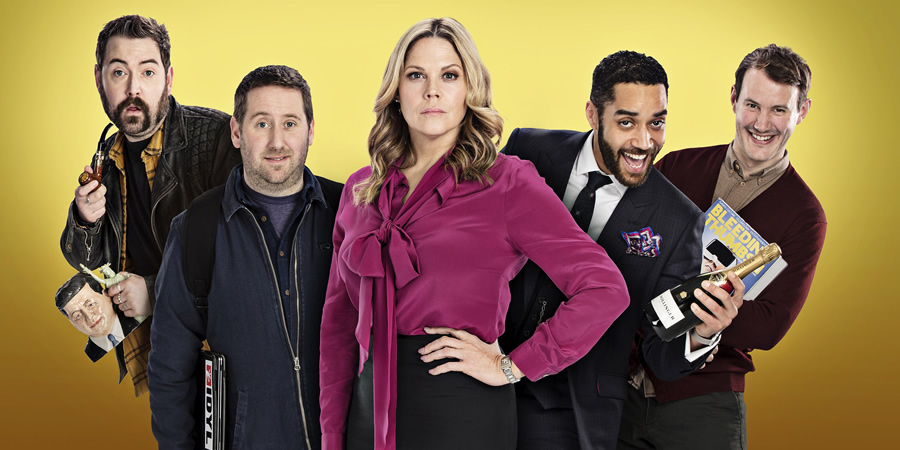 You mention Mary McCormack. You also have so many other brilliant cast members including Lolly Adefope, Aimee Ffion-Edwards and Morwenna Banks. What was it like filming with them?

Jonny: Amazing. We have so many amazing actors in general. There were bits when we couldn't believe who was coming in to do the show.

Nick: Every day there would be someone new that you could go "oh my God" about.

Jim: They are just so good at what they do, Lolly is just so naturally funny and perfect for the part of Naomi, as soon as she came on and we did our first scenes together it was wonderful.

Nick: I couldn't really picture that character on paper and then as soon as she was cast it was like "Of course, that makes perfect sense."

Jim: I've never had an on screen girlfriend before and Aimee was just great, she's done some intense stuff with Peaky Blinders and Luther so it was nice to work with her and see what she does and how she approaches the drama and the tears, as there are a lot of tears towards the end of the show! I learnt a lot from her.

What's the first thing you'd do if you got £14 million over night?

Jim: I'd probably buy an Audi!

Jim: No. I'd probably buy a nice house somewhere in Highgate, next to Sting.

Nick: I'd just buy a big room for more Bobbleheads. Actually, you know Tom Hanks in Big? I'd do that! I'd get Big! No, I'd get plastic surgery to look like Tom Hanks in Big, that's what I would do.

Jonny: I'd just be really boring, I'd be like Ewan. I'd have a diverse investment profile. Couple of investment properties, buy a Volvo, get busy! Maybe I'd get a season ticket too. That's probably it, it would be as boring as you like.

Jim: You'd be the best landlord!

Nick: Actually you'd be a terrible landlord, the pub would never be open before 5pm.

Samuel: No, I'd go and live somewhere warm. And I've got this thing about doing a carpentry course. I'd go and make tables and chairs.

Nick: In all seriousness, I'd give it all to charity!