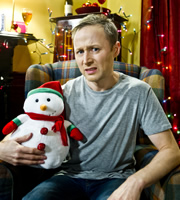 The nation's favourite phone-in host, Falconhoof, is keen to bestow some festive spirit on one of the Adventurecall players; zoned-out waster, Dee Dee, is rudely awoken by some very spooky visitors; lovable ex-junkie with the chip on her shoulder, Jacqueline McCafferty, has a very important present to buy; and it's the welcome return of the silver-haired executive with delinquent tendencies, Mr Mulvaney, who's busy rehearsing his speech for the office party.

Adding to the character pieces are more of Limmy's razor sharp observations. There's a Christmas morning that young Limmy will never forget in the 'Christmas of Yesteryear', and we join Limmy and his pals at a house party where there are some troublesome guests, pranks and a special musical performance.

We venture behind the scenes on the Christmas Special of Limmy's Show! to speak to the star himself about one of his most-loved characters - Falconhoof.

Fond memories of childhood come flooding back as we look back at Christmas days gone by.

The Daily Record interviewed Limmy about his 2013 Christmas special. The interviewer is Paul English.