The second series of Limmy's BBC Scotland sketch show. Falconhoof the adventure phone-in host gets a new sidekick, and zoned-out waster Dee Dee is blasted off into space.
Preview clips 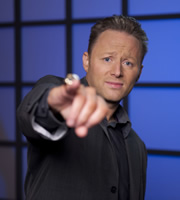 In episode one, we see the return of phone-in host Falconhoof as he introduces his new sidekick.

Zoned out waster Dee Dee is back in his living room and preparing to blast off into space.

We get acquainted with new characters including the 1950s drug experimenter Larry Forsyth who, this week, tries 'Moonbeam'.

There's the psychic medium Raymond Day who brings news from the other side that not everyone wants to hear and the animated Major Boo Boo who makes a design faux pas.

Adding to the character pieces are more of Limmy's observations on life plus stand-alone sketches. In this episode he makes an important discovery about a building he'd never noticed before, deals with a robber, gets stuck into a magical painting and expands his 'Open Sign' empire.

Also, if you think you're safe behind your TV screen, watch out: Limmy knows all about your wee secret...

Limmy experiments with psychokinesis, using the power of his mind to change the time!

Do you ever get the feeling you don't really know what you're doing? Limmy does.

Limmy takes us behind the scenes to show us a wee bit of what happens on set. Enjoy!