Falconhoof, the adventure phone-in host, has to deal with a particularly angry caller following an incident with some winged sandals. 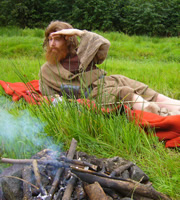 Mr Mulvaney, the silver haired businessman with delinquent tendencies, rehearses his excuses before the police arrive to question him over a spot of vandalism.

Meanwhile, the Supercomputer generates a portal that allows Limmy to stick his hand through into the real world and take revenge on an old classmate. The pub legend in the flat cap tells us about blondes and zoned-out waster Dee Dee sorts the pecking order of his kitchen utensils as he wonders who the hard man of the kitchen is.

Limmy-like observations on life and stand-alone sketches this week include a very peculiar children's DVD that catches his eye, a tirade on the infiltration of Americanisms into everyday language and a Peeping Tom who encounters a hard looking man.

There's also a lyrical dissection of a Donna Summer track, the first Scotsman to encounter a Roman, a cheeky dodger who avoids being dumped, the pressures of advertising, the truth about phonebox users and a Cuban gangster who gets his kicks from a certain type of dancing.

Other sketches include a comedy club cleaner with performance aspirations, a look at why statues appear to be well endowed, and a sorry tale about a contact lens. Among the arresting visuals in episode three are the pluke-infested Doorface who terrifies a woman in her home, the dating style ad for girls, a broken man's bid for custody and the surprising game of Pick a Number.