Jacqueline McCafferty goes shopping for good gear in Versace, Falconhoof has a difficult caller to deal with, Mr Mulvaney the silver haired businessman with delinquent tendencies raises the alarm - and Limmy gets himself a new girlfriend. 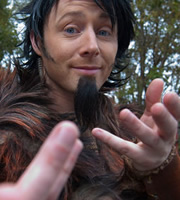 In episode one, we are reacquainted with characters like hard-bitten ex-junkie Jacqueline McCafferty who's determined to get out of her tracky and improve her lot, so starts by shopping for good gear out of Versace.

There's the silver haired businessman with delinquent tendencies, Mr Mulvaney, who tries to ensure he has a watertight explanation before raising the alarm.

There's also zoned out waster Dee Dee who has been doing such a power of sleeping recently that he can't work out whether a party really happened or not; plus the 80s-style Detective who finds himself in a most unlikely place as he is continually outwitted by his nemesis.

Episode one also introduces adventure game phone-in host Falconhoof who does his best to keep it together on live television with a particularly difficult caller. And fans of Limmy's live show will be delighted to see the primary school power broker Wee Gary make his animated television debut - here he invents a cunning playground pyramid scheme.

In amongst the character pieces are very Limmy-like observations on life and plenty of stand-alone sketches. He introduces his new girlfriend, bumps into an old acquaintance in the supermarket, double-takes his way round Glasgow, sorts out his inner dialogue, makes a paper airplane and tunes into A-ha.