Preparations for the big day are well underway. Whilst Caroline is distractd elsewhere, Alan receives a surprise visitor. Will the ceremony go off without a hitch?
Preview clip 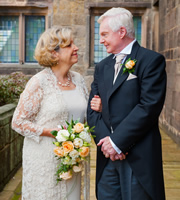 Gillian wakes up having slept on the sofa. It is early morning. A quick flashback to last night's confession to Caroline terrifies her. But much to Gillian's surprise and relief, Caroline's filled with empathy. Caroline says they are friends and she won't turn her in to the police.

Elsewhere, preparations are underway for Alan and Celia's big day. Celia focuses on the more traditional aspects of a wedding ceremony, whereas Alan has Stag and Hen dos on his mind!

A few days later, Caroline's back at school when she hears Kate has been rushed to hospital because of complications. Caroline drops everything to be there for her. She walks into the maternity clinic to find a nervous and anxious Kate in the waiting room - has she lost the baby?

Later that evening, Caroline's having dinner with Alan, Celia and Lawrence. She's doing a good job of looking cheerful even though we sense the ongoing stress in her personal life. Alan's telling everyone how his brother, Ted, has hurt his leg so is unable to fly over for the wedding. Just then, the doorbells rings, Alan goes to investigate and it's Ted! He's flown over to surprise Alan. The other family members couldn't make it, but he wanted to be there. Everyone's delighted.

Finally, it's the day of the wedding and celebrations are in full swing. Celia looks beautiful and the speeches are full of warmth and laughter. But with emotions running high between Caroline and Kate, and Gillian eager to make a move with Robbie, will everything go off without a hitch?

Celia and Alan start to plan their wedding speeches with their friends and family.