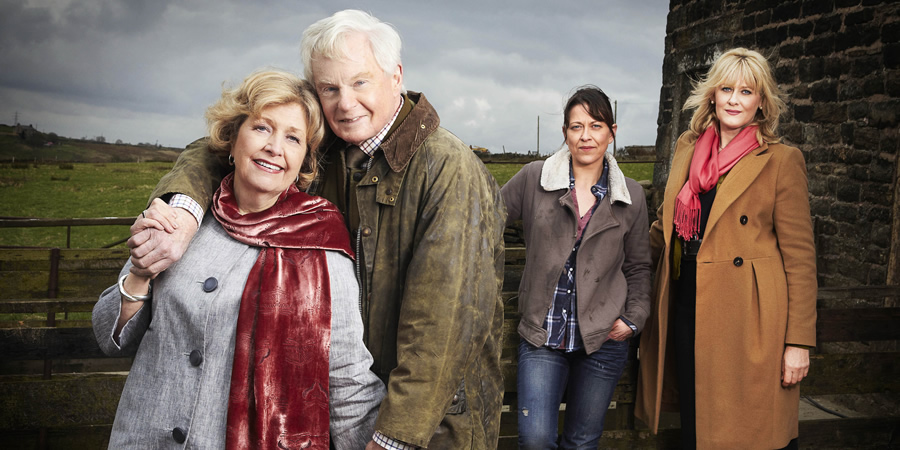 Last Tango In Halifax sees Alan and Celia unexpectedly but instantly reignite the feelings they'd had as teenagers when they meet after a gap of 60 years. In this uplifting tale the path of true love is anything but smooth and the pair are surprised to find it's their own families who create some rather bumpy obstacles.

Both widowed, it's Alan and Celia's daughters whose dysfunctional lives bring drama at every turn. Caroline, a career-focused head teacher, is worried that her mum is rushing into things with Alan, but with her adulterous husband John back on the scene having left his alcoholic mistress and with relationship issues of her own she's happy to let things run their course.

Gillian works hard on the family farm as well as in the local supermarket and she's pleased her dad has found a companion. But she's currently having her head turned in the wrong direction whilst also dealing with her dead husband's brother, as he looks to turn her son Raff against her, meaning she has little time to concentrate on her father's love life.

Series 2 picked up the dramatic storyline that concluded the first series... Alan had just suffered a serious heart attack and the couples' nuptials were hanging in the balance.

Meanwhile, Celia's successful and uncompromising daughter Caroline is forced to face up to her newly discovered sexuality, the demands of her girlfriend Kate, her mother's prejudice and a failed marriage. While Alan's daughter Gillian, both independent and insecure, finds herself in a surprising love triangle having cheated on her partner Robbie with Caroline's hapless husband John.

Series 3 starts with Alan and Celia discussing going on a honeymoon adventure to New Zealand to visit Alan's brother Ted. Their happiness is short-lived however when someone turns up from Alan's past with devastating consequences.

Series 4 saw two episodes broadcast at Christmas 2016. Caroline is coming to terms with yet more changes in her life. Two years after Kate's tragic death, she has broken the news of a new job at a very different school and a new family home. Also in a moment of weakness, Caroline finds herself sharing a moment with an interesting woman, further adding to the unusual developments in her life. A possible move is less welcomed by Celia and Alan but their attentions are more focussed on setting the world of amateur dramatics alight as Celia lands a leading role in the local production of Blithe Spirit. Meanwhile, Gillian is struggling to come to terms with some unusual activity in the barn. With issues from her past coming back to haunt her, can she be strong enough to stop them affecting her relationship with Robbie?

Series 5 sees Alan and Celia now seven years into their marriage but, having moved into a desirable bungalow with stunning views across the Calder Valley, they aren't quite seeing eye to eye. It isn't just their differing politics that's a source of tension; Alan's new supermarket job brings an unexpected challenge in the form of a wild local lad, and at Far Slack Farm, Gillian faces trouble with a giraffe.