As the referendum on Scottish Independence fast-approaches, Kevin Bridges takes to the road - and to the stage - to gather diverse views from the streets of Scotland. 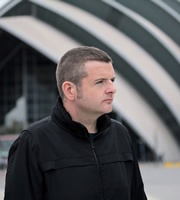 Kevin Bridges takes to the road - and to the stage - to gather diverse views on the referendum on Scottish Independence.

With a strict "no politicians" policy in place, Kevin's mission is to speak to ordinary people across Scotland and beyond but also to help him make up his own mind about the one of the biggest decisions in Britain's history.

Kevin travels to Corby, Northamptonshire, home to a large Scottish ex-pat steelworker community. The Corby clan hold an annual Highland Games event and this year augmented it with their own Referendum vote.

Kevin then meets up with his mum and dad in a local cafe to discover they're divided, but united by the family sense of humour.

In Edinburgh he meets members from the Scottish Youth Parliament. It's the first election where citizens from the age of 16 can vote, in the most important ballot in Scottish history.

The stand-up segments in this programme were originally broadcast in Kevin Bridges Live At The Referendum.