Series 5, Episode 2 - The Sinner And The Sandman

A retired local psychic inadvertently makes the most amazing and impossible prediction of his career.
Preview clips 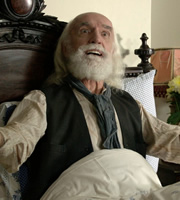 As Creek and Polly strive to settle into rural life, they find their apparently serene country village is riddled with all manner of strange and disturbing undercurrents...

Trouble is already brewing in the nearby community centre - recently reopened after a major face-lift - where a sordid sex scandal is about to break, casting a pall of gloom over the celebrations.

And at the vicarage, the arrival of a new baby is overshadowed by tales of a "weird hump-backed beast", that has been seen prowling in the garden by night and foraging through the rubbish bags for foodstuffs.

Even the Creek residence is struck by misfortune, as the prospect of a plague of deadly Japanese Knotweed threatens to trigger wide-scale panic throughout the village. And after a whole slew of other unfortunate events, there are fears that some strange parochial Apocalypse is about to dawn.

Jonathan Creek, meanwhile, finds himself paying a charitable call on the eccentric Mr Eric Ipswich - aka 'The Amazing Astrodamus' - an ancient and reclusive former psychic magician who will shortly bring the village to a standstill by pulling off the most baffling act of clairvoyance in history.

And what is behind the macabre recurring dream that continues to haunt Creek's wife Polly... in which the kindly children's nursery character The Sandman is transformed into a dark and chilling figure of evil?

Creek arrives at Mr Ipswich's house and gets more than he bargained for.

If you look long enough and hard enough...

Creek looks through old Parish records and something catches his eye.

A meeting at the Village Centre

Sordid details of the Village Centre benefactor are revealed.